Man Indicted For Arson In Phoenix, Oregon Fire of 2020 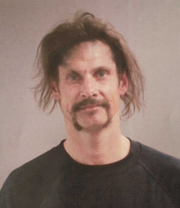 Michael Bakkela
by Bill Gabbert
A Man charged with setting fire in Southern Oregon that burned 15 properties. A grand jury has indicted a 41-year old man for setting a fire in Phoenix, Oregon on September 8, the day the Almeda Drive Fire started near Ashland. Michael Jarrod Bakkela was arraigned on 2 counts of Arson in the First Degree, 15 counts of Criminal Mischief in the First Degree, 14 counts of Recklessly Endangering Another Person, and one count for Unlawful Possession of Methamphetamine. Mr. Bakkela, who is being held on bail of $5 million, is accused of starting a fire that damaged 15 properties between Phoenix and Medford that contributed to the Almeda Drive Fire. The Jackson County Sheriff’s Office announced September 15 that at least 2,357 structures were destroyed in the Almeda Drive Fire, which started north of Ashland and rapidly spread northwest through Talent, then Phoenix, and was finally stopped south of Medford. Almeda Drive Fire map Map of the Almeda Drive Fire in Southern Oregon, September 10, 2020. Google/Wildfire Today/NIFC The wording of the indictment implies that the fire allegedly started by Mr. Bakkela merged with the Almeda Drive Fire. From Oregon Live: According to the county Sheriff’s Office, residents in the 1100 block of Quail Lane called 911 at 5:09 p.m. Sept. 8 to report that a man, later identified as Bakkela, was lighting a fire near the railroad tracks behind their home. A deputy took Bakkela into custody a short time later. Detectives suspect Bakkela drove into a gated area, parked a vehicle, started a fire and then fled north before he was stopped, according to the Sheriff’s Office. Typos, let us know HERE. And, please keep in mind our commenting ground rules before you post a comment. Share this: SHARE Related Map Almeda Drive and South Obenchain Fires Glendower Fire (aka Almeda Fire) burns toward Medford, Oregon September 9, 2020 map Almeda Drive Fire Video shows large number of structures burned during the Almeda Drive Fire in southern Oregon September 12, 2020 structures burned Almeda Fire Phoenix Talent Oregon Oregon fires have burned about a million acres September 12, 2020