Hydroxychloroquine Opposed by Big Pharm at Cost of Many Lives! 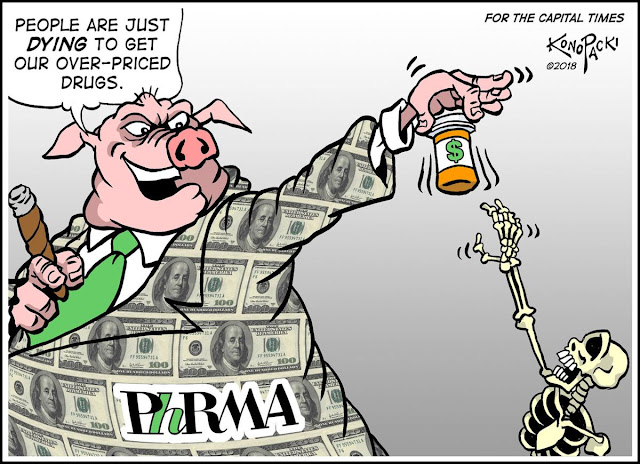 Big Pharma continues to be the poster child for so many people who don't trust corporate America. Putting greed above all, even the sick and dying. Hydroxychloroquine is in the antimalarial and 4-aminoquinoline families of medication.

Hydroxychloroquine or chloroquine, was approved for medical use in the United States in 1955. It is on the World Health Organization's List of Essential Medicines, the most effective and safe medicines needed in a health system. Chloroquine is an immunosuppressive drug and anti-parasite commonly used in malaria treatment. It’s most often taken as a tablet by mouth.

Hydroxychloroquine is being opposed by AMA Doctors who get paid by Big Pharm to always prescribe most expensive drugs they hold patents on. Hydroxychloroquine is cheap because patents have expired. The UK, France, China, and many other countries are using Hydroxychloroquine with success. President Trump is for using the drug asap, but the Deep State is in deep pockets as well as government bureaucracy. The greed of these people over health and safety of citizens has killed millions over the years. 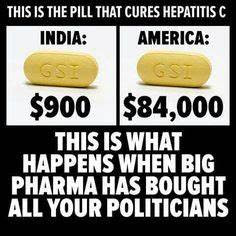 Last fall, Valeant Pharmaceuticals raised its prices on a number of its products. For some of them, that increase was as much as 800%. Another one is Solvadi, a drug used to treat hepatitis C, which Gilead Sciences has raised the cost to U.S. consumers to between $84,000 and $168,000 for a 12-week treatment (in comparison, patients in Japan pay $300 for the same thing).
A few years ago, Gilead did the same thing for its HIV treatment, Strilbild. Yet another was Naxolone, a drug used to treat opioid addiction. First patented in 1961, this drug goes for an average of $2.90 a dose in the developing world. Cost for U.S. patients: $28,000 a year. Yet another example: Thiola, a drug used to treat kidney disease. Drugmaker Retrophin managed to grab the rights to this 40-year-old drug in 2014, then promptly raised the price from $1.50 to $30 a pill. In one study published recently in the Journal of Clinical Care, scientists compiled six articles and 23 ongoing medical trials in China, using the evidence to argue that “chloroquine seems to be effective in limiting the replication of SARS-CoV-2 (virus causing COVID-19) in vitro.”

Until The Deep State politicians who are also on the dole, are term limited out, Big Pharm will continue to hold back cures and therapeutic treatments paying off doctors and politicians to keep driving their "gravy train!"
at 10:43 AM