David Shulkin to lead the Department of Veterans Affairs. 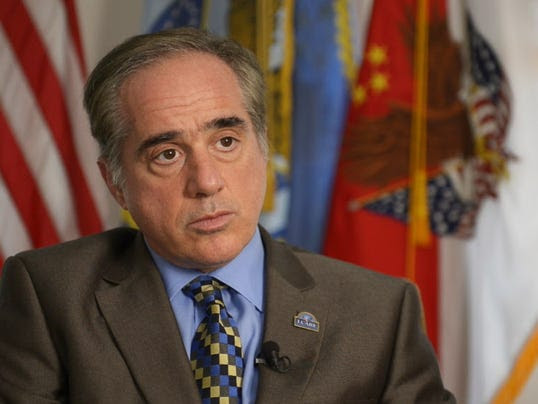 (Photo: Jarrad Henderson
WASHINGTON —  on Wednesday announced his choice of David Shulkin to lead the Department of Veterans Affairs.
Shulkin is the current undersecretary for health at the VA and has been in that post since July 2015.
During his tenure, Shulkin told USA TODAY recently that he had cut the number of veterans waiting for urgent care from 57,000 to 600. At the same time, he spearheaded an effort to provide same-day care at all 167 VA medical centers across the country by the end of last year. It’s unclear whether he reached that goal.
Shulkin is a physician who previously ran hospitals in New Jersey and New York and was named among the 100 most influential people in American health care by Modem Healthcare.
Trump promised during the presidential campaign to overhaul the VA so that veterans wouldn’t have to wait for care and could choose to get care outside the VA if they wanted. Currently, they can do that if they can’t get a VA appointment within 30 days or within 40 miles of their homes.
Shulkin has said in interviews that he favors a hybrid model, where the VA provides care that it specializes in, such as treatment for post-traumatic stress disorder, traumatic brain injuries and loss of limbs, for example. And he said the VA should consider discontinuing other services that the private sector may better provide, such as obstetrics and gynecology.
Shulkin is blunt about the challenges facing the VA. He has said the agency has had trouble attracting talent from outside the agency, at one point, saying simply, "I need help."
Trump made the announcement about Shulkin during Wednesday's long-awaited news conference.