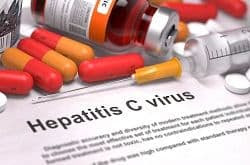 Virus undetectable in high percentage of patients after treatment.

WASHINGTON – A Department of Veterans Affairs (VA) database study shows that new drug regimens for hepatitis C have resulted in “remarkably high” cure rates among patients in VA's national health care system.
Of the more than 17,000 Veterans in the study, all chronically infected with the hepatitis C virus at baseline, 75 percent to 93 percent had no detectable levels of the disease in their blood for 12 or more weeks after the end of treatment. The therapy regimens lasted 8 to 24 weeks, depending on patient characteristics.
“This promising news comes as VA is dedicating significant funds to help greater numbers of patients with hepatitis C,” said David Shulkin VA Under Secretary for Health. “In March, we announced our ability to fund care for all Veterans with hepatitis C for fiscal year 2016 regardless of the stage of the patient’s liver disease. VA has long led the country in screening for and treating hepatitis C. As of mid-September 2016 alone, the Department treated more than 100,000 Veterans infected with the virus. More than 68,000 of these patients had been treated with these new highly effective antivirals.”
The VA researchers analyzed data from four subgroups of patients infected with hepatitis C—genotypes 1, 2, 3, and 4—and found that genotype 1 patients showed the highest cure rates and genotype 3 the lowest. Genotype 1 was by far the most common type of infection among the four subgroups.
The study group of more than 17,000 Veterans included more than 11,000 patients with confirmed or likely cirrhosis, a liver disease that can result from hepatitis C, among other causes. The study team found "surprisingly high" response rates of around 87 percent in this group.
The overall results were consistent with those from earlier clinical trials that led to FDA approval of the three new drug regimens in the study: sofosbuvir (SOF), ledipasvir/sofosbuvir (LDV/SOF) and paritaprevir/ ritonavir/ ombitasvir and dasabuvir (PrOD).
The drugs, introduced in 2013 and 2014, have been credited with revolutionizing hepatitis C treatment, which means a cure is now in reach for the vast majority of patients infected with the virus. Previously, using earlier drug regimens, most patients could expect, at best, only a 50 percent chance of a cure.
"Our results demonstrate that LDV/SOF, PrOD and SOF regimens can achieve remarkably high SVR [sustained virologic response] rates in real-world clinical practice," VA researchers wrote.
The new drug regimens examined in the study do not contain interferon, which has troublesome side effects such as fever, fatigue, and low blood counts. The newer drugs are considered far more tolerable than the older interferon-based antiviral regimens, although they are far more expensive.
The researchers extracted anonymous data on all patients in VA care who received HCV antiviral treatments between January 2014 and June 2015 using the VA Corporate Data Warehouse, a national, continually updated repository of data from VA's computerized patient records.
The study's optimistic finding is a source of optimism for Veterans and others infected with the hepatitis C virus, according to coauthors Dr. Lauren Beste and Dr. George Ioannou, specialists in internal medicine and hepatology, respectively, with the VA Puget Sound Health Care System in Seattle.
According to the researchers, modern, direct-acting antiviral drugs for hepatitis C far outperform our older options in terms of efficacy and tolerability. With older drugs, most patients could not undergo antiviral treatment because they had contraindications or medication side effects. With newer options, almost anyone can safely undergo treatment for hepatitis C.
VA research continues to expand knowledge of the disease through scientific studies focused on effective care, screening, and health care delivery. Some studies look at particular groups of hepatitis C patients—for example, female Veterans, or those with complicated medical conditions in addition to hepatitis C.
For more information on VA care for hepatitis C, visit www.hepatitis.va.gov and www.hepatitis.va.gov/patient/hcv/index.asp. Information about the database study may be found in the September 2016 issue of the journal Gastroenterology.