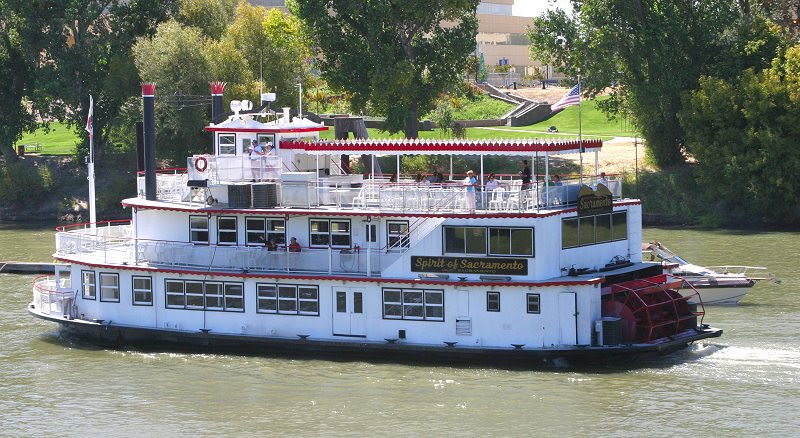 Fisherman Mario Cipriaso said Sunday morning, he saw something you don't see very often.
"I was fishing a point, and you can hear the metal cracking, making al that noise, and I looked up, and I saw it was sinking. Then it rolled over, and capsized," Cipriaso said.
Just after midnight Sunday, the Coast Guard received a call saying the "Spirit of Sacramento"- an 87 foot paddle wheel boat - was sinking near Bethel Island, in Contra Costa County.
"You just smell diesel. And it was like, man this is bad," Cipriaso said.
The "Spirit of Sacramento" once shared the screen with John Wayne in the 1955 film, "Blood Alley." After its Hollywood career, the boat lived a second life as tourist boat in Old Sacramento. Many locals were hoping the boat would be turned into a bed and breakfast or a restaurant. However, those dreams along with the boat, are now under water.
"It was beautiful. I just needed a lot of cleaning and a little bit of work. But it was still feasible. Ya, it's a shame," owner of the Rusty Porthole bar, Robert Brunham said.
Fishermen said the boat had just changed hands after being sold in an auction for just $1,000. They said the new owner was trying to move it across the Delta, when it started to sink.
"I guess it may have caught it. Maybe ripped a hole in the back. I can only assume," Cipriaso said.
The Coast Guard tried salvaging it, until it finally flipped over. The biggest issue now is the fuel leaking into the river. The vessel may be carrying up to 600 gallons of diesel and some have already spotted the concern.
"How will they get it out with all that diesel? Because the tides were coming back in so it pushed all the diesel out," Cipriaso said.
The Coast Guard is working with other state and local agencies on a plan to deal with the environmental threat.
at 6:58 PM