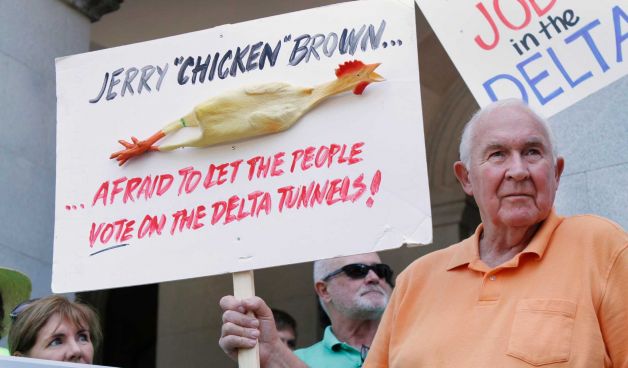 DELTA TUNNELS
Sacramento – A document obtained under a Public Records Act request reveals a taxpayer grant of a $17 million from the Bureau of Reclamation to the California Department of Water Resources on July 30, 2015. Read the federal agreement here. The funds were intended to help: “…lead to the conservation and rehabilitation of habitat to improve fish and wildlife populations and ultimately to a healthier Delta ecosystem.”
While the agreement describes a habitat conservation planning effort to help recover fish and wildlife, the funds were used instead to plan and promote the Delta Tunnels water export project.
The timing of the grant is important, because at the time as the grant agreement was drafted (March 2015), and well before the agreement was signed (July 2015), DWR had already jettisoned the conservation components of the Bay Delta Conservation Plan (BDCP) in favor of only constructing massive diversions on the Sacramento River with no habitat restoration.
Tim Sloane, executive director the Pacific Coast Federation of Fishermen’s Associations noted, “The Bureau of Reclamation does not appear to have questioned releasing the federal tax dollars, even though the Bureau already knew that habitat restoration was no longer included.  This allowed DWR to use the funding obtained under a misrepresented grant to aid the Brown administration to plan for and promote the tunnels.  Clearly, there are captive federal and state agencies moving this project forward without regard for the health of the fish these agencies are supposed to be protecting.”
On April 30, 2015, state officials formally announced that the original BDCP had been abandoned in favor of the “WaterFix” Tunnels project, citing inability to meet more stringent legal requirements applicable to conservation plans.  While the BDCP previously included 100,000+ acres of habitat restoration as part of a habitat conservation plan, the now separate “EcoRestore” program includes a goal just 25,000 acres, and 5,000 acres of “habitat enhancements.” This restoration has been required of the existing Delta water export operations since 2008-2009, and is required to be funded by the water exporters.
Osha Meserve, an attorney representing Delta farming and environmental interests explained, “The grant agreement clearly states that these funds would be used for conservation planning purposes. Yet, the funds were instead used to directly advance the Tunnels, a project that does not include any of the conservation described in the agreement. Ironically, funding that was supposed to promote protection of fish and wildlife is now being used to fund a project that will destroy endangered and threatened fish species. Plus, beneficiaries of the Delta tunnels, like Metropolitan Water District, Kern County Water Agency, and Westlands Water District, are supposed to pay for project planning, not the Federal taxpayers.”
The proposed Tunnels project would divert essential fresh water needed to protect endangered salmon and more than 27 other endangered species from the Sacramento River and send it south before it reaches the Delta Estuary and San Francisco Bay.
More than 1/4 of a billion dollars has already been spent on the BDCP planning effort, including millions in federal dollars. PRA documents indicate the bait and switch with the funds provided under the guise of protecting fish had already happened well in advance of the latest grant agreement being signed.
While planning for the Delta Tunnels has continued at a breakneck pace, the commitments to restore and protect the Bay Delta ecosystem gather dust.
“Federal funds meant for conservation were redirected into planning for the Delta Tunnels, including payment for no-bid contracts and special interest lobbying pitched as ‘public outreach’.  Amidst the worst drought in our lifetime, California officials took federal taxpayers for a bath,” said Barbara Barrigan-Parrilla, executive director of Restore the Delta. “DWR should have spent these funds on planning improvements to their existing pumps; for as little as $200 million, the south Delta pumping facilities could be improved to vastly reduce take of endangered fish.”
The project has a history of cost overruns more than doubling since it first was initiated.  Running out of money, DWR and prime beneficiaries, Westlands and Metropolitan Water District of Southern California, have sought and obtained federal tax dollars for the water export Tunnels that were meant to ensure protection of fish and wildlife.
at 7:24 PM