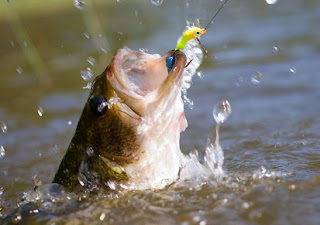 Delta/Stockton
The long wait for salmon in the Sacramento River near Freeport may be at last over with at least a dozen fish landed by anglers spooning below the Freeport Bridge on Sunday. Stripers continue to invade the Delta from the bay, and they are moving on a daily basis from upriver toward Collinsville. Sturgeon are out there, but few fishermen have been targeting the diamondbacks so far this year. Johnny Tran of New Romeo’s Bait in Freeport said, “The wait is finally over as the salmon have arrived with at least a dozen landed below the bridge. I was trolling a Silvertron spinner weighted down with 3 ounces in order to make a 45-degree angle into the water on Sunday morning near Scribner’s Bend, and I hooked a big fish that came unbuttoned. There were several salmon rolling on the surface, so it looks like they have arrived.” Alan Fong of the Fishermen’s Warehouse in Sacramento confirmed the improved action below the Freeport Bridge by jigging spoons or trolling Silvertron spinners or Brad’s Killer Fish. Tran added that drifting live mudsuckers or tossing shad-patterned swimbaits are working for stripers in the Sacramento Deep Water Channel or near Liberty Island for fish from 2 to 20 pounds. The stripers have been boiling in the early mornings in the Deep Water Channel around 4 to 5 miles above the mouth of Miner Slough. Striped bass fishing remained very good with Mark Wilson, striper trolling expert, reporting continued solid action in the Broad Slough and Collinsville areas with both shallow and deep-diving lures. He released stripers at 14 and 12 pounds on Friday on the shallow-diving Rat-L-Traps using light tackle. He advised, “The fish are moving around on a daily basis, and some of the schools have not been willing to bite, and we have even hooked fish that we didn’t see on the meter, so the fish are a bit finicky and the action is different every day.” The best bite has been at the end of the outgoing tide into the first two hours of the incoming tide, but the action dies by the middle of the tide. Salmon fishing has been slower in lower Suisun Bay, and Tony Lopez of Benicia Bait and Tackle said, “The water must be too warm down here since the fish are blasting through. Striper fishing is good for schoolies with blood worms or pile worms from the shorelines.” Tom Sanders of Lost Anchor Bait and Tackle at McAvoy’s Boat Harbor in Bay Point was rewarded with a 52-inch diamondback near the Yellow Can out in front of the harbor. He said, “The fish are there, it is just a matter of trying and finding the right window between the winds.” The Rio Vista Bass Derby and Festival is only a few weeks away with the 68th annual event taking place from Oct. 9-11. Information at www:bassfestival.com. The San Joaquin River is starting to heat up for striped bass, and trollers and bait soakers are getting in on the action. The 40-degree temperature swing limited bass action to a few select windows within the past week of triple-digit temperatures, but cooler water conditions will improve action in the coming weeks. Gary Vella of Vella’s Fishing Adventures said, “I’ve been tearing up the stripers in the Delta for the past week, catching up to 30 fish per trip ranging from 12 inches to 18.5 pounds with limits during five straight days in a row trolling deep diving lures from 14 to 16 feet in the San Joaquin River.” For largemouth bass, Randy Pringle, the Fishing Instructor, reported the 40-degree temperature swing from 60’s in the early mornings to over 100 degrees by the afternoon, and the 40 degree temperature swing changes everything. If the swing is 20 degrees, the bite should last throughout the day, but a 40 degree swing will require adjustments. He said, “The temperature swing will require that you try different things, and adjust, adjust, adjust, as if you stay with one bait too long, you will die by the sword.” He advised starting with topwater lures such as the ima Little Stick, Helly P’s, or Persuader Buzzbaits, but if the fish aren’t biting, you should have at least three rods ready with different baits. He added, “Try different things, run the lures fast, run them slow.” Pringle added, “When the weather changes, the bite will really improve.” Striper fishing has been phenomenal for schoolie stripers around moving water in the Mokelumne and the San Joaquin with Optimum’s Double AA swimbaits or the ima Little Stick. He said, “Working major moving water is the key.” For largemouth bass, Pringle, reported solid action on the ima floating Flit or jerkbaits for reaction baits while working the bottom with the Chigger Craw or Havoc Flat Dog has been another productive method. Alan Fong of the Fishermen’s Warehouse in Sacramento has found good action for up to 30 largemouth bass flipping Missle D-Bombs near structure. In Stockton, Brandon Gallegos reported quality largemouth are coming out of Whiskey Slough with live minnows, and the stripers are boiling in the mornings with small topwater Spooks near Weber Point in downtown Stockton and also in Whiskey Slough.