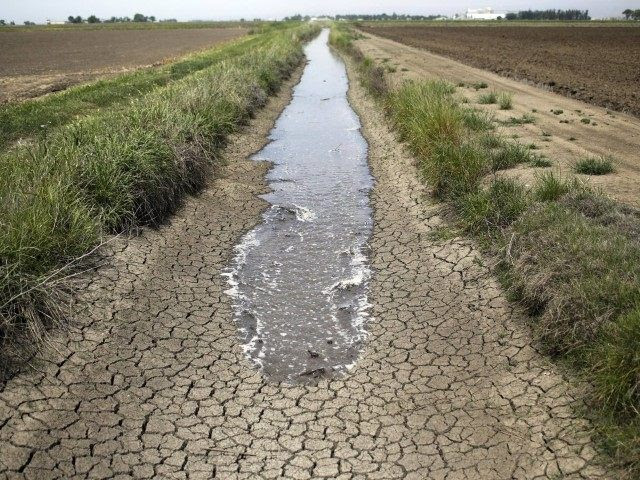 Gov. Jerry Brown of California is fired up about nailing his citizens to the wall, should they dare to use more than their allotted amount of water. On Sunday, Brown said that those who did not take shorter showers would be punished with fines of up to $500, in order to cut urban water use 25 percent; now, according to CBS News, water authorities will use “smart meters” to monitor water use and update them for purposes of fines.
None of this will do much good.
Let’s assume that Brown’s plan works, and California saves approximately 1.5 million acre feet of water, or 490 billion gallons of water. That barely touches the 11 trillion gallons of water California needs in order to replenish its supplies from the drought. It’s also a wild misallocation of resources.
Let’s begin with actual wastes of water in the state of California. Thanks to Environmental Protection Agency regulations as well as local state regulations aimed at protecting the three-inch Delta smelt, a fish about which Americans supposedly care deeply, California currently pumps 150 billion gallons of usable water out to sea each year. Normally, that water would go to the fields of the Central Valley, the fruit and nuts producing region of California that supplies so many of those goods to the rest of the country. Instead, the entire region has gone dry, jacking unemployment rates up to 40 percent in some areas. As the Mayor of Mendota, California, a heavily Hispanic farming community of 10,000, told me back in 2009:

President Obama needs to come out here immediately. Just the other day, 52 other mayors and I sent a letter to President Obama calling on him to visit Fresno County to see what the impact has been. We have the highest unemployment in the state of California. I don’t have a problem with endangered species, but water distribution must be looked at.

Fat chance. Instead, those communities have gone dry. Now the whole state is going dry. But at least the delta smelt are thriving.
The smelt aren’t the only fish benefitting from generous water usage by the state of California. In 2014, Congressman Tom McClintock (R-CA) explained, “last month the Bureau of Reclamation drained Folsom and other reservoirs on the American and Stanislaus rivers of more than 70,000 acre feet of water – enough to meet the annual needs of a city of half a million people – for the comfort and convenience of fish.” The goal: to push baby salmon to the Pacific Ocean, where they swim anyway, and to change the temperature of the water for their benefit. According to the Center for Biological Diversity, the state of California wastes 260 billion gallons of water each year “saving salmon” and for “other conservation purposes.”
Overall, 2.6 million acre-feet of water have been washed into San Francisco Bay to help the fish.
But the biggest problem in California is that the government has refused to build the reservoirs and dams necessary to actually save water when the rain does come. As the Wall Street Journal points out, Israel has weathered droughts for years. So has Arizona. Both built infrastructure. California has not, largely because politicians like Jerry Brown stopped such construction decades ago. The Wall Street Journal points out:

Money is not the obstacle. Since 2000 voters have approved five bonds authorizing $22 billion in spending for water improvements… desalination projects have been abandoned… some areas have been slow to shift from fixed rates.

But there’s plenty of cash to go around for Brown’s $100 billion fantasy choo-choo train.
Assuming none of that will change, it is not urban populations in California using a disproportionate share of water. It is farmers. Farming represents no more than two percent of the California economy, yet represents 80 percent of its human water usage. A full 10 percent of California’s water goes to farming almonds – 1.1 trillion gallons of water. Another 100 billion gallons goes to alfalfa, which is largely shipped overseas for use in places like Japan.
Brown says that farmers aren’t just watering their lawns, but that’s the point: even if all Californians stopped watering their lawns completely, that wouldn’t solve the drought. California may lead the nation in production of vegetables (one third of all veggies in the US come from California) and fruits and nuts (two thirds from the Golden State). But so what? Heavily subsidizing farming in California is still heavily subsidizing farming in California. Subsidies boost production. That doesn’t make subsidies justifiable in a state supported almost entirely on other industries.
California’s drought is partly about weather, but it’s just as much about government mismanagement. Environmentalism trumped good policy; now, subsidies trump rational distribution via market pricing. The result: a very smelly situation.
at 10:38 AM