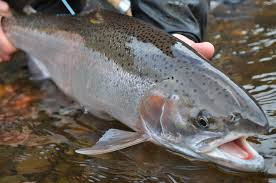 (Sacramento) The upper section of the American River that has been closed to fishing since October 31 will reopen to steelhead fishing on January 1, 2015, but the outlook for the fishing is not promising, based on a very low fish count to date at the Nimbus Fish Hatchery.

This stretch of river is from the U.S. Geological Survey gauging station cable crossing about 300 yards down-stream from the Nimbus Hatchery fish rack site to the SMUD power line crossing at the southwest boundary of Ancil Hoffman Park.

Only 10 adult steelhead were reported at the Nimbus Fish Hatchery as of today, December 29, an alarmingly low number for this time of year. By contrast, the hatchery had trapped 335 adults to date last year, according to Gary Novak, hatchery manager.

Normally there are hundreds and sometimes thousands of steelhead showing at the facility at this time of year.

Hopefully, the steelhead are late in their migration, just as the fall run Chinook salmon were. The main body of the fall Chinook salmon run arrived over a month late this fall on the American River.

Few anglers have been fishing on the American River lately. The salmon fishing closes December 31, but most anglers have already put down their rods.

"Opening day is going to be SLOW if the action at the Nimbus Basin is any indication," reported Roland Aspiras, an avid American River steelhead fisherman. "I fished both yesterday and today for barely a sniff. I floated eggs, swung spoons and tossed jigs for zilch. I saw one fish follow a spoon in to the bank. The fish seem confused with the new channels they (state and federal governments) created at the basin."

One angler, Leo Salcido of Sacramento Pro Tackle, reported landing two steelhead in the 4 pound class while tossing out Little Cleos in the basin on December 23.
Releases to the lower American below Nimbus Dam continue to be 900 cfs, very low for this time of year.

As one who has spent thousands of hours fishing on the river, going to meetings and rallies fighting for the restoration of the river and its fish, and writing about this unique fishery, the shockingly low return of steelhead to date is very disenheartening.

I was part of a dedicated group of anglers who worked to restore the steelhead on the river through a series of measures, including upgrading the hatchery facilities, protecting wild spawning steelhead from poaching, pressuring the hatchery managers to take eggs throughout the run to preserve genetic integrity and battling the Bureau of Reclamation for higher minimum flows and water temperature standards.

We were very successful in restoring and enhancing the steelhead to where numbers at the hatchery reached 3,000 to 4,000 fish in some years and where wild steelhead returned in good numbers to the river many years. In 2011 and early 2013, I experienced some of the best steelhead fishing I have experienced anywhere on my home river, the American.

All wild steelhead on the American River must be released, since naturally-spawning Central Valley steelhead are listed as "threatened" under the Endangered Species Act. However, anglers may keep two hatchery steelhead, as indicated by clipped adipose fins.

Unfortunately, I fear that the abysmal management of the American, Sacramento, Feather and other Central Valley rivers over the past few years has spurred this apparent decline in the steelhead population.  Department of Water Resources and Bureau of Reclamation officials systematically drained Trinity Reservoir on the Trinity River, Lake Shasta on the Sacramento River, Lake Oroville on the Feather River and Folsom Lake on the American River in 2013, during a record drought, to export water through the State Water Project and federal Central Valley Project.

This water was shipped to fill the Kern Water Bank and Southern California reservoirs, as well as to supply water to corporate agribusiness interests in the Westlands Water District and oil companies conducting fracking and steam injection operations in Kern County. Little carryover storage in the reservoirs was left in 2014 as the drought continued.

You can read my investigative news piece on this on DailyKos.

Meanwhile, the Brown administration is rushing the Bay Delta Conservation Plan (BDCP) to build the peripheral tunnels, a corporate water grab disguised as a "habitat restoration" and "conservation" plan. If constructed, the tunnels would hasten the extinction of Sacramento River Chinook salmon, Central Valley steelhead, Delta and longfin smelt and green sturgeon, as well as imperil the salmon and steelhead populations on the Trinity and Klamath rivers.

I will update the count of steelhead at the fish hatchery and on the river as the steelhead season proceeds. But it sure doesn't look very good.