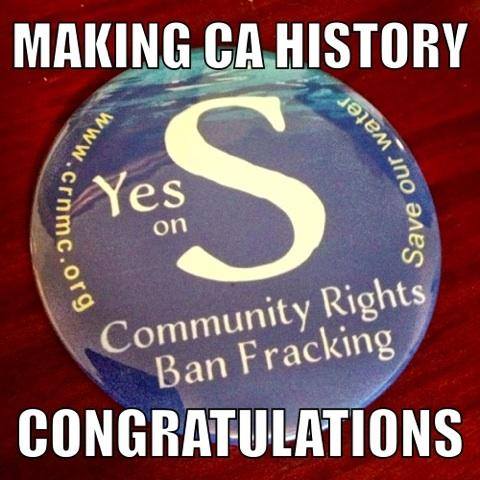 In election victories for the environment and public health, voters in San Benito County and Mendocino Counties on November 4 approved ballot measures that will ban fracking and other extreme oil-extraction techniques.

The victory in the San Benito was achieved despite a massive ad campaign funded by the oil industry, the state's largest and most powerful corporate lobby. Anti-fracking measures also passed in Denton, Texas, and Athens, Ohio, according to the Center for Biological Diversity.

“The oil industry’s millions were no match for San Benito County voters determined to protect their air and water from fracking pollution,” said Hollin Kretzmann of the Center for Biological Diversity. “But every California community deserves the same protection, so Gov. Brown needs to act now to halt fracking’s toxic threat to our health and environment.”

However, Measure P in Santa Barbara County, an initiative very similar to the San Benito measure, lost after oil industry groups spent more than $7.6 million to beat the measure placed on the ballot by local grassroots groups, according to Sierra Club California.

That spending ranked the local ballot measure campaign in Santa Barbara as one of the most expensive in the country. "The oil industry’s campaign relied heavily on advertising that misled voters about the measure’s content, and outspent proponents by more than 20 to 1," the Club stated.

“Winning two out of three county fracking ban measures on the ballot in California is great news for every Californian who wants clean air, clean water and a safe future for the next generation.

We knew the oil industry would spend a lot this election. It has given every indication that it is determined to continue business as usual, and is unwilling to change its polluting practices, even as the rest of the world faces the extremes of climate disruption caused by continued oil dependence. And as we have seen by recent shutdown orders of injection wells used to dispose of fracking fluid in California, the oil industry is unable to conduct fracking without polluting.

History is on our side. Sierra Club members are inspired by the voters of San Benito County and Mendocino County, and the good citizens in Santa Barbara County who have shown such strong commitment to social and environmental progress. Fracking will end in California. This election shows that, in the absence of a statewide moratorium, Californians are prepared to force that end in their own communities.”

In contrast to Phillips' statement, Catherine Reheis-Boyd, President of the Western States Petroleum Association, the lead trade association for the oil companies and the most powerful corporate lobbying group in California, lauded the "volunteers" of the No on Measure P campaign for their successful efforts in a tweet to her supporters:

“Congrats to the @NoOnMeasureP team & all the volunteers who helped make today reality! Glad Santa Barbara got it right on science & facts!”

The election cycle was marked by extraordinary spending to influence elections in California by the oil industry. The Sierra Club said oil interests ran independent expenditure campaigns against at least two Southern California assembly members and one Bay Area candidate for the state senate.

Just days before the election, seventh quarter lobbying filings for the two-year legislative session were released. They showed that the Western States Petroleum Association (WSPA) spent $4,009,177.87 in three months to influence legislators during the period including July, August and September this year, the last three active months of the legislative session. That compares to $1.7 million the group spent during the 6th quarter.

Besides serving as the voice for the oil industry, it is crucial to understand that WSPA President Reheis-Boyd also wears another hat – “marine guardian" - that has allowed her and other corporate interests to help eviscerate "marine protection" in California.

In one of the biggest conflicts of interest in recent California history, Reheis-Boyd served as the Chair of the privately-funded Marine Life Protection Act (MLPA) Initiative that created fake “marine protected areas” in Southern California.

While she was pushing for increased fracking and offshore oil drilling in California, the oil industry lobbyist also served on the task forces to create questionable “marine protected areas” on the Central Coast, North Central Coast and North Coast.

These alleged “marine protected areas” fail to protect the ocean from fracking, oil drilling, pollution, military testing, corporate aquaculture and all human impacts on the ocean other than sustainable fishing and gathering. The Marine Life Protection Act Initiative, lauded by corporate “environmentalists” and state officials as the “most open and transparent” process in California history, was in fact one of the most corrupt and conflict of interest-infested environmental fiascos ever seen in the state.

Documents obtained under the Freedom of Information Act and media investigations by Associated Press and truthout.org reveal that the ocean has been fracked at least 203 times in the past 20 years, including the period from 2004 to 2012 that Reheis-Boyd served as a "marine guardian.”

Fortunately, despite the enormous influence of Big Oil on California politics through lobbying, public relations campaigns, campaign contributions and the industry’s hijacking of state and federal marine regulatory panels, Californians have voiced growing concerns about fracking.

A recent Public Policy Institute poll found that 54 percent of Californians oppose expanded fracking. Another recent poll commissioned by environmental organizations found that two-thirds of state residents want a moratorium on fracking, according to the Center for Biological Diversity.

The public’s concern about fracking is fed by recent revelations linking the oil industry to air and water pollution. Nearly 3 billion gallons of oil industry wastewater have been illegally dumped into California aquifers that were clean enough to supply drinking and irrigation water, according to recently released state Water Board documents.

The Center also noted that data collected by the South Coast Air Quality Management District shows that oil companies have used millions of pounds of air toxic chemicals in the Los Angeles area over the past year. A new multistate study published in Environmental Health found dangerously high levels of cancer-causing chemicals in the air around fracked wells.

"The public tide is turning against fracking, not just in California but around the country,” Kretzmann said. “As voters from San Benito to Denton, Texas, showed, if regulators won’t protect them from fracking pollution, local communities can and will use the ballot box to protect themselves.”
at 7:28 PM