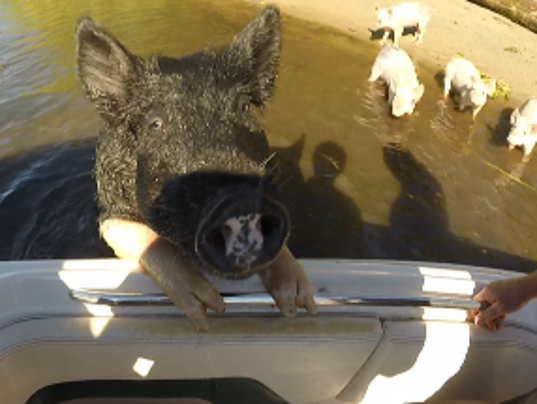 (Photo: Mark Pepper, News10/KXTV)
462CONNECT 5TWEETLINKEDIN 6COMMENTEMAILMORE
STOCKTON - Adam Farrow lives on the water, owns 15 boats and a Lodi boat repair business. What he saw this past summer in the Sacramento-San Joaquin Delta took even him by surprise: there are about 10 pigs living on an island northwest of Stockton.
"I was over at Windmill Cove on Taco Tuesday when someone said there's pigs over there. I said, 'really?' We went over and took them some food. They love cheeseburgers," Farrow said.
There are two adults and several offspring. When Farrow or other pig supporters show up with food, the animals happily swim out to boats to chow down on the apples and carrots brought to them.
The most popular theory is the pigs were meant for a summer luau but the event never happened, and the pigs were apparently dropped off on the island.
"They were bringing food, whoever dropped them off. There are a lot of empty bags, but no current food. What they're eating now is hyacinth," Farrow said. "Hopefully, whoever dropped them off, will take responsibility."
Another delta resident, Blair Hake, has helped create a "Friends of the Delta Pigs" Facebook page. He said in just one day, the page has 70 fans.
Hake and Farrow seem determined to keep getting food out to the pigs so it's not a rough winter for them.
at 1:45 AM