Garamendi At Odds With Obama 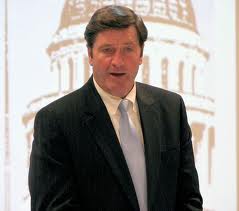 Incumbent Rep. John Garamendi of Walnut Grove is a Democrat, but he’s highly critical of the way President Barack Obama is waging war against the Islamic State.
“What is of concern to me is the Constitution of the United States, which says Article 1 Section 8, only Congress can declare war. And the president is conducting a war without the authorization of Congress,” Garamendi said.
When asked if the president has exceeded his authority with regard to the war on ISIS, Garamendi said, “That's a debate point. But the bottom line is he had to come to Congress to get authority to continue on.”
Republican Assemblyman Dan Logue of Marysville is also critical of the president.
“The bottom line is ISIS should have been stopped a year ago. And now we have possibly a full-scale war on our hands. I believe we have to step up the strikes, build up a stronger coalition. The coalition that we have doesn't trust our president because they don't believe he's dedicated to finishing the job,” Logue said.
Both candidates are reluctant to put American troops in harm’s way.
When asked if he was prepared to authorize funding for American boots on the ground, Logue said, “Oh, no, I'm not prepared to do that. I don't think that's going to be required.”
Garamendi responded, “If it's open-ended and it's boots on the ground, I'm not going there.”
When it comes to the American economy, the two candidates are far apart.
KCRA 3 asked Logue if he supported the cause of raising the nation’s minimum wage.
“I really don't support raising the minimum wage because it would cost us 500,000 jobs,” he said.
California has already raised the minimum wage to $9 an hour. That’s about 24 percent higher than the national standard of $7.25 an hour -- something Garamendi wants to change.
“When you raise the minimum wage, you're putting purchasing power in the pockets of people who don't presently have it. They'll have $1,700 more a year to spend, and that's how you grow the economy,” Garamendi said.
The two candidates are also far apart on the issue of immigration reform.
“I'm basically very concerned about the borders as they are right now. The problem with immigration reform is the public doesn't trust Congress,” Logue said.
A comprehensive immigration reform package did pass the U.S. Senate but died in the House of Representatives.
”We really need it,” Garamendi said. “We really need to have comprehensive reform. You can't deal with the border without comprehensive reform,” he told KCRA 3.
Logue countered, “I think it's imperative that we do a couple of things. One is secure the border and prove to the people that we will do that before we move any further on immigration reform.”
KCRA 3 asked Garamendi to define comprehensive immigration reform.
“Well, it means you've got the secure the border. You've got to set up a system so employers know they are hiring legal people,” he said.
Meanwhile, Logue said, "It’s important to make sure that we have a workfare program where immigrants can come across the border, work in America and actually go home without being afraid of not being able to come back.”
“If they have any criminal record, they have to be deported,” Garamendi added. "There needs to be a path to citizenship, not an easy one but a path to citizenship. But there has to be a fine. They broke the law there has to be a fine.”
The Ebola crisis has also become an issue in the race.
”Until we find out exactly what we're dealing with, I would have a moratorium on people from (certain) countries coming to America,” Logue said.
Garamendi responded, “It's very interesting to note that there are people out there who say that regulations are the problem. Yet those are the people that are calling for tighter regulations on travel and the like.”
KCRA 3 asked Logue how he would enforce a moratorium for people coming from West Africa to the United States.
He said he would have Homeland Security involved.
"You're going to have to draft a plan. If we don't act soon it's going to be a disaster in California,” Logue said.
“Clearly we need to do more,” Garamendi said. “The protocols at hospitals across the nation are inadequate, and the nurses are quite correct. They're the ones who are most at risk; they want good protocols, good methods and good equipment in place. We're going to have to deal with this.”
The issue of high-speed rail is also a factor in the District 3 race.
Logue wants to derail what he calls the "train to nowhere."
"I absolutely oppose it," he said. "You're talking about a total of $90 billion for a train that goes absolutely nowhere. I'd rather see those resources go to our educational system; our universities.”
Garamendi agreed that the starting point of the high-speed rail project needs to be in a different location.
"The high-speed rail system should have started in the urban areas, San Diego to Los Angeles and then up to the Antelope Valley," he said.
When asked if he supports the use of federal dollars for high-speed rail’s plan, Garamendi said, “Well it's underway. What are we going to do, back away from it?”
The candidates are united on one point: Both actively oppose Gov. Jerry Brown’s plan to build twin tunnels through the Delta to help water flow from Northern California to Southern California.
“The tunnels I think will be a disaster. We don't even have water to put in the tunnels. What we need to do is build more reservoirs,” Logue said.
“No dam tunnels,” Garamendi said. “ Period. It is a boondoggle -- $25 billion wasted. You don't get one gallon of new water.”
Campaign finance records from Maplight.org show that Garamendi has raised just under $1 million as of Sept. 3, while Logue has $1.2 million in funding.