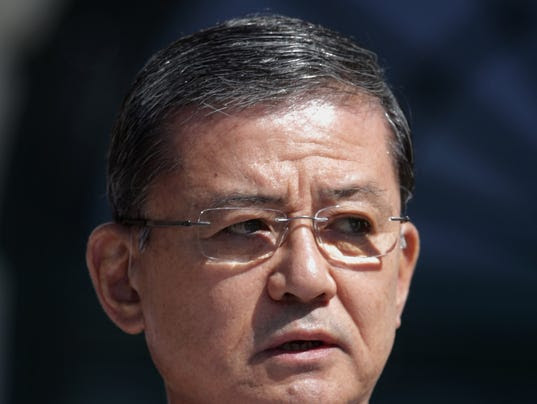 (Photo: Chip Somodevilla, Getty Images)
SHARE 491CONNECT 97TWEET 29COMMENTEMAILMORE
The American Legion, the nation's largest veterans service group, called Monday on Department of Veterans Affairs Secretary Eric Shinseki to resign, citing reports of delayed medical care, patient deaths and performance bonuses for officials linked to health care and other management problems.
"It's a story of poor oversight and failed leadership," said American Legion Cmdr. Daniel Dellinger, who also hailed the former Army chief of staff's decorated military record. "This is the most difficult thing I've ever had to do."
Other major veterans groups did not make the same demand for a leadership change, but all expressed growing outrage over allegations that many veterans have been harmed -- and some have died -- because of delays in cancer screening tests and other types of medical care.
Paul Rieckhoff, chief executive officer and founder of Iraq and Afghanistan Veterans of America, said he would survey members about whether Shinseki should resign.
STORY: VA treatment records falsified, probe finds
MORE: VA says it has plan to fix widespread issues in Fort Collins
"I will tell you that there's a lot of anger, there's a lot of disappointment and a lot of frustration across the country. It seems like one catastrophic story after another (relating to delays in medical care)," Rieckhoff said. "What everyone agrees is that there's been a failure of leadership and accountability and oversight."
The VA responded late Monday, highlighting progress under Shinseki's leadership in reducing veteran homelessness and a backlog of compensation claims, enrolling 1 million veterans under new education benefits and 2 million in the VA's healthcare system.
VA press secretary Drew Brookie said that if allegations about patient care and employee misconduct are substantiated "swift and appropriation action will be taken."
"Secretary Shinseki has dedicated his life to his fellow veterans, and nobody is more committed to completing the work that lies ahead," Brookie said.
A White House statement Monday expressed confidence in Shinseki's "ability to lead the department and to take appropriate action."
The Veterans of Foreign Wars -- the largest organization of combat veterans -- and the Disabled American Veterans both declined to call for Shinseki to step down. But leaders of both groups also voiced concerns about the slow delivery of health care.
"It is imperative that the VA respond quickly, forcefully and publicly to these reports and answer questions about whether similar problems are threatening other VA facilities or the system as a whole," said Garry Augustine, DAV Washington executive director.
"Secretary Shinseki (must) get publicly in front of this immediately to address the valid concerns of veterans and their families and to reestablish the credibility of the entire VA health and benefits systems, and that of his own office," said VFW National Commander William A. Thien.
Dellinger also asked that Shinseki's top two administrators step down — Robert Petzel, undersecretary of health, and Allison Hickey, undersecretary for benefits.
The American Legion has 2.4 million members and 14,000 posts worldwide.
The harsh criticism across the board stood in contrast to even recent praise from veterans groups as the VA demonstrated success in areas such as reducing its backlog of compensation claims or veteran homelessness.
Tom Tarantino, policy director for the Iraq and Afghanistan Veterans of America, described Shinseki late last year in an interview with The Washington Post as a "transformational figure."
Rieckhoff revised those comments Monday, saying that "he's transformational, But the question is can he transform the (VA ) culture? And so far the points are not on the board."
Veterans groups have grown increasingly impatient with reports that delays in cancer screenings by the VA may be linked with 23 deaths in recent years or statement by a retired doctor who allege that slow medical responses at a VA hospital in Phoenix are linked to 40 deaths at that facility.
Petzel has said no evidence has been found to support those allegations, but the VA Inspector General's Office is investigating the Phoenix situation.
USA TODAY reported Sunday that an internal VA investigation found that clerks at a VA clinic in Fort Collins, Colo., were trained in how to falsify records to cover up delays in care.
Dellinger, who took office in August, said he remained a strong supporter of Shinseki as recently as a month ago. But he said too many problems regarding oversight of health care have since mushroomed.
"The entire system seems to be infected," Dellinger said.
The American Legion issued a document outlining more than two dozen cases of VA medical officials receiving bonuses despite problems in medical care or the delivery of other VA services such as compensation benefits.
at 9:06 AM