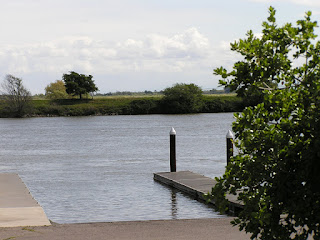 Raised in the Sacramento Delta as a young boy my brother and I would venture through
Freeport, Clarksburg, Steamboat Slough and wherever our Schwinn bicycles could take us.
Fishing, hunting,  trapping crawdads and gigging frogs. We would sell the frogs to kids at school,
and fried up frog-legs at our camp-outs with a crawdad boil and fresh picked 'delta' corn-on-the-cob.
Exploring and sometimes getting in trouble raiding sugar beet fields and fruit orchards, we
thought it exciting to get chased as no one was ever able to catch us. ( But a lot of cuts and
scratches the price!)
Though we did have some virtues
helping the Delta farmers keep down the
jack-rabbit and ground s
quirrel population with our .22 rifles and
sometimes bow and arrows, we saw ourselves
as real Huckleberry Finns and
Tom Sawyers with territory rights to
do as we pleased! Our fantasies could
have been due to my being
an avid Mark Twain fan, or just genetic from my Louisianian heritage where my Great Grandfather lived
and shrimped for a living out of Shreveport La. When the fields flooded, we would build rafts to spear the
fish that swam in the shallows.

Later in life I was part owner and General Manager of Steamboat Slough Resort where we
had a restaurant and docks for fueling up and enjoying delta life. Taking that opportunity to
use our watercraft rentals to finally explore more of the 1,000 miles of Delta Waterways,
I was forever bonded with the magical wonder one experiences because of the sense that this
living organic Eco-System we call ... Delta, gets in your blood. It's a "river rat" thing, and anyone
can partake of it's authenticity and flavor when they come and explore... The Delta. If Governor Brown and the Big-Ag and Water Districts of Southern California
have their way and build a "Twin Tunnel" system or whatever kind of Peripheral
Canal they sell to voters, future generations may not be able to enjoy the kind of
outdoor water world adventures the Delta still offers. While an overwhelming majority
of Urbanite's in the delta area have never taken advantage of their "out of sight out of mind"
natural treasure, they will wish they had when summer delta winds no longer cool the
scorched valley in triple digit heat, and other related environmental adverse side effects
like droughts and outrageous water bills remind them of their carelessness.


Certainly the tens of billions of dollars that they want to spend can be used to
find alternative water projects so the fragile Delta is not the main source to put at risk.
The fish and wildlife are just one of many so very important and vital aspects of dangers
that could cause a catastrophic mistake with no way of recovery.

The science of the current environmental impact reporting have not even considered
invasive species including microbiological and pollution issues that currently threaten
the habitat and are still not solved. We have to fix the levee deterioration that is in the
hands of the U.S. Army Corp of Engineers, and do it without shutting down business
and ruining tourism at the same time. The special interest water companies are getting the big end the stick.
We the taxpayers will pay for the project which could ruin the Delta and
then these companies get our water for free charging exorbitant amounts.
They just pay for the lines from our canals to Urban systems.
This unequal arrangement needs to be revisited at the very least if not scrapped altogether.
Each involved municipality can go to community owned water districts who will care about
impacting their communities and not making profit the priority.
ShareThis