Tunnels to be moved...Bird Sanctuary Targeted 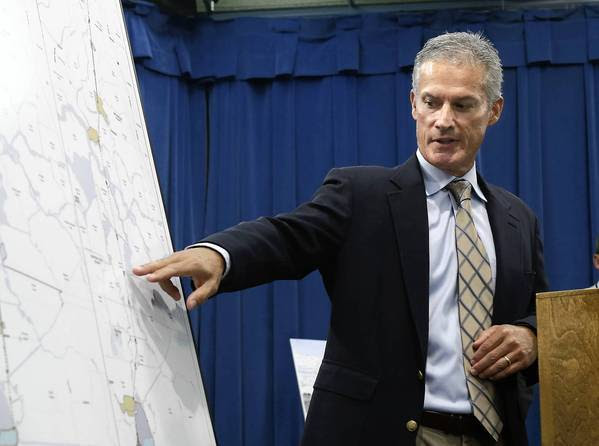 Gordon Enas, the Department of Water Resources principal engineer for the proposed water diversion tunnels for the Sacramento-San Joaquin Delta, gestures to the new proposed tunnel routes at a news conference in Sacramento.

California water officials are proposing changes to a multibillion-dollar plan for two water diversion tunnels for the Sacramento-San Joaquin Delta, according to documents released Thursday.

The planned changes come in response to criticism voiced by local elected officials, farmers and landowners in the delta and are meant to reduce the tunnels' impacts on them, officials said.
"Clearly the people in the delta would be impacted by the project, but we'll take every legally available step to mitigate the impacts," said California Natural Resources Secretary John Laird. "We're trying to be true to the science and respond to the concerns of people in the delta."
The proposals include moving the tunnel forebay farther east, away from the towns of Courtland and Walnut Grove, and reducing the size of a water storage reservoir from 750 acres to 40 acres.
More of the dirt and chemicals removed while drilling the tunnels would also be deposited on state-owned land as opposed to private land.
The new tunnel route and muck disposal plan means the project would eliminate fewer homes in the delta and have a lesser impact on roads and bridges, officials said.
Officials said they would also replace a proposed surface pipeline in the town of Hood with a tunnel to reduce impacts on the town.
The height of pumping plants would also be reduced and the tunnels' length would be shortened from 35 miles to 30 miles.
The changes would incorporate the existing Clifton Forebay into the project, expanding it by 600 acres.
The tunnels would carry water south from the delta to vast farmlands and thirsty cities. Proponents say the project would provide a reliable water supply while reducing the mortality of threatened fish, because water would mostly be diverted from the north portion of the delta, where fish would not be sucked into deadly pumps.
The plan also calls for creation of more than 100,000 acres of new habitat -- floodplains, tidal marshes and grasslands -- that proponents say will help recover dwindling fish populations and other wildlife species. The total cost of the tunnel-conservation plan is estimated at $25 billion.
Officials said the proposed changes would not impact the cost of the project or the amount of water it would pump.
Critics are raising concerns that under the new alignment, the tunnels will now run under Staten Island, which is owned by The Nature Conservancy and intended to preserve wildlife habitat. The island is a refuge for greater sandhill cranes, a threatened species under state law.
California taxpayers spent $32 million from two bond measures in 2001 to preserve the island as wildlife habitat through the purchase of conservation easements.
Three large vertical shafts are proposed on the island to "launch" and service the tunneling machines, each with a surface work area of up to 90 acres. Two large disposal areas for tunnel muck are also proposed on the island.
Water officials said they could use tunnel muck to strengthen levees, raise the subsiding island, and restore natural habitat.
But officials with The Nature Conservancy said moving the tunnels to the island could have dire impacts on the cranes.
"Because of Staten Island's unique habitat values, it is with serious concern that we contemplate ... the proposed use of the Island as the location of its water export tunnels," Wendy Pulling, director of conservation programs at The Nature Conservancy in California, said in a statement. "Construction and operation of the tunnels could have significant negative impacts on crane habitat."
Pulling said the organization will "vigorously pursue all options available in order to ensure that the sandhill cranes are not harmed."
And while local farmers and other delta activists who have long opposed tunnel construction applauded the diminished impact to their land, they said the tunnel project was still unacceptable to them.
"We're pleased they're finally looking to improve some of the impacts on residents. But fundamentally, it's still the same flawed project," said Osha Meserve, an attorney who represents water districts in the delta. "It still will turn our area into a war zone for 10 years, and then it will take the same amount of water, impact our water quality and our local economy ... all for a plan that would not save the fish."
Tunnel construction, which does not have to be approved by voters or the Legislature, would take from 10 to 15 years once the planning process is complete.
at 7:02 AM