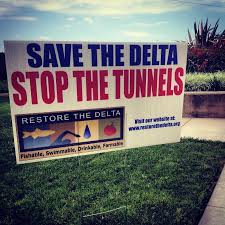 The Associated Press
WALNUT GROVE, CALIF. — Activists opposed to California's $14 billion twin-tunnel plan for the Sacramento-San Joaquin Delta are accusing state transportation workers who removed anti-tunnel yard signs of trying to silence them.
The signs proclaiming "Save the Delta! Stop the Tunnels!" have disappeared over the past several days from yards fronting a state highway in Sacramento County.
Transportation officials they were placed too close to the highway, violating state law.
Caltrans spokesman Gareth Lacy says any private sign is forbidden within a state right of way.
The state Natural Resources Agency, which oversees the tunnel project, says it's working with Caltrans and property owners to ensure that signs are placed in a way that follows the law and respects freedom of speech and property rights.