Pat Morita – Mr. Miyagi and Beyond 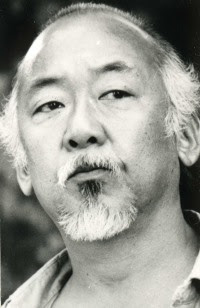 Actor Pat Morita is shown in this
undated file photo. (AP Photo)
Pat Morita enjoyed a long career in a Hollywood where good roles for Asian actors were scarce. On what would have been his 81st birthday, we look back on his life and career in this story we originally published June 2011.

Born Noriyuki Morita in Isleton, California, Pat Morita, the son of migrant fruit pickers, had a difficult youth. After contracting tuberculosis at age 2, he spent much of his childhood confined to a series of hospital beds, often in a full body cast. Told he would never walk again, he only accomplished the feat after a surgeon fused four of his vertebrae together when he was 11 years old.

Almost immediately upon his release from the hospital, his family was sent to a Japanese internment camp in Gila River, Arizona, where they stayed for the duration of WWII. Moving back to Northern California, the family opened a Chinese restaurant in Sacramento, where a teenaged Morita would entertain diners with his jokes. He described the enterprise to the Los Angeles Times as, “a Japanese family running a Chinese restaurant in a black neighborhood with a clientele of blacks, Filipinos and everybody else who didn't fit in any of the other neighborhoods.”

In the early 1960s, he launched a stand-up act as “The Hip Nip.” The self-deprecating, stereotype-embracing moniker is a good indication of his attitude about his own ethnicity (during a nightclub performance for Pearl Harbor survivors in Waikiki, he once apologized on behalf of his people for “screwing up your harbor”). It was an attitude that would prove practical in a Hollywood that seemed interested only in stock Asian characters.
Morita’s debut film role provides a good example. In the musical Thoroughly Modern Millie, he plays a villainous henchman named Bun Foo. By age 30, Morita had quit a job with Aerojet General to go into showbiz full-time, sustaining himself with a series of small parts on TV, many which were billed in the script only as ‘House Boy’ or ‘Tree Surgeon.’ One of his more memorable was his role as Rear Admiral Ryunosuke Kusaka in 1976’s WWII saga Midway.

He may have been able to eke out a living forever playing bit parts that called for Asian faces be they Japanese, Chinese, Korean or other, but we might not be remembering Morita today had he not landed a small but memorable role in the hit sitcom Happy Days. For two seasons, the Cunninghams and friends had congregated at Arnold’s Restaurant, but the diner owner was never seen. When it was decided that the audience needed to meet Arnold, show creator Garry Marshall called Morita and offered him the part of Matsuo “Arnold” Takahashi.
Morita left Happy Days after one season when he received an offer to star in a Welcome Back, Kotter spin-off called Mr. T and Tina. Playing Taro Takahashi, Morita became the first Asian American to have a leading role in a primetime show, but it proved short-lived. The show was cancelled after only five episodes.

He enjoyed a recurring role in Sanford and Son as the punnily named Ah Chew and would eventually return to Happy Days in 1982, as well as appear on Laverne & Shirley as Mr. Wong.
But Morita’s defining role came when he was 52 years old.

That’s when he won the part of Mr. Miyagi, a semi-reclusive, wise Okinawan karate master who helps New Jersey transplant teen Daniel-san confront California bullies by teaching him self-defense through a grueling regimen of household chores. Producer Jerry Weintraub originally wanted a Japanese, rather than Japanese-American, actor for the role, and some might be surprised to learn Morita struggled to produce an authentic sounding Japanese accent. The producer also insisted that the actor be billed as the more authentically ethnic sounding Noriyuki “Pat” Morita.
The Karate Kid became one of the best-loved movies of the 1980s, with Mr. Miyagi’s “wax on, wax off” enduring still as one of the biggest catchphrases to come out of that decade. The movie spawned three sequels (for which Morita would reprise his role), a video game, and an animated TV series. It turned the virtually unknown Ralph Macchio into a teen idol and earned Morita an Oscar nomination for Best Supporting Actor. Ironically, given the dearth of good Asian roles available at the time, he lost to Cambodian American Haing S. Ngor who won for his part in The Killing Fields.

The runaway success of The Karate Kid would spark a career resurgence for Morita, though many of his subsequent roles were in forgettable martial arts pics like Do or Die, American Ninja V, Bloodsport III andThe Karate Dog. But he did lend his talents to more socially conscious productions, narrating a documentary about Japanese-American baseball and starring in Only the Brave, an indie feature about the 100th Infantry Batallion/442nd Regimental Combat Team, a WWII fighting unit made up entirely of Japanese Americans and one which became the most highly decorated unit in the history of the U.S. military, including among their ranks 21 Medal of Honor recipients.
It proved to be one of his final projects. Morita died on November 24, 2005 of kidney failure at his home in Las Vegas. He was 73 years old.