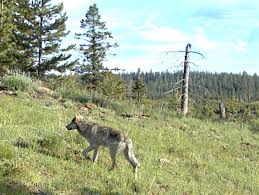 The wandering wolf known as OR-7 has returned to Oregon from California, but he hasn't given an indication that he's planning to settle down.
The Oregon Fish and Wildlife Department said the wolf's odyssey brought him into southwest Klamath County on Tuesday evening.
In more than three years, the wolf has covered at least 3,000 miles, biologists estimate.
His roots are in northeast Oregon with the rest of Oregon's wolves. But early in life, OR-7 set out southwest, breaking away from his pack and becoming the first wolf in a long while in southwest Oregon and Northern California.
Wolves in the United States were hunted nearly to extinction but have made a comeback in recent years under federal protection.
OR-7 is believed to be in search of a mate or another pack, both unlikely prospects in the region. As a California resident, he had the state to himself, wolf-wise.
Officials said Wednesday he may well divide his time between the two states. He migrated to California in the last days of 2011 and has since roamed through several counties, spending a few days back in Oregon about this time last year.
"He'll be looking for good habitat," said Michelle Dennehy, a spokeswoman for the Oregon department.
Oregon Wild, an environmental group, called him the world's most famous wolf and hailed his return in a statement: "He's captured the imagination of people across the country and around the world, and become an ambassador for the recovery of native species."
The two states track OR-7 through GPS technology.