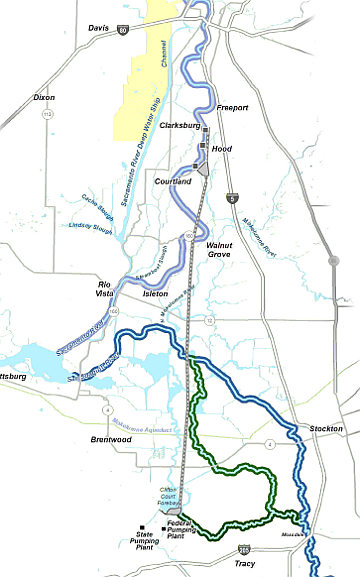 $23 billion plan for California’s trickiest water problem: the Sacramento-San Joaquin Delta.
State water officials are proposing a pair of tunnels through the Delta, which supplies water to two-thirds of the state’s residents. That water supply will depend on thousands of acres of habitat restoration to bring back endangered fish.
Thursday’s release was more a trickle than a flood, with just a third of the several thousand-page plan unveiled. But to Chuck Bonham of the state’s Department of Fish and Wildlife, it was a victory.
“Many have said it would never come out,” he said. “Some have said it couldn’t come out. It’s out.”
The Bay Delta Conservation Plan is designed to meet two “co-equal” goals, as they’re known. First, to reverse the decline of the Delta’s endangered fish, some of which have suffered steep declines in recent years. Second, to supply cities and farms across the state with water, something that’s been a sore spot recently.
“Because of the presence of Delta smelt this year and also of migrating salmon, we had to reduce deliveries, or exports, from the Delta on the order of 700,000 acre-feet of water,” said Mark Cowin of the Department of Water Resources. Water managers reckon an acre-foot to be about what a typical suburban household uses in a year, though many western households use less.
Cowin says similar cutbacks could be prevented in the future with two, 35-mile water tunnels that would run under the Delta. The tunnels would withdraw water farther away from sensitive fish.
“This plan does not include any guarantees for water supply deliveries.”
That doesn’t mean the state gets all the water it wants. “This plan does not include any guarantees for water supply deliveries,” Cowin said. According to modeling, the project would export 4.8 to 5.6 million acre feet of water a year, close to the historical average but not as high as several recent years.
The supply also depends on more than 100,000 acres of habitat restoration, including tidal marshes that could help endangered fish recover. The restoration work would be unprecedented for the region. “We’re talking about restoration potentially observable from space,” said Bonham.
This draft follows a previous version released in 2012 that was criticized by state and federal wildlife officials, who said it didn’t do enough to protect endangered fish.
Bonham says the new plan reflects that feedback. “These goals and objectives are specific at a level that I don’t think we’ve been talking about in the Delta before,” he said. Changes notwithstanding, many residents and lawmakers from the Delta continue to oppose plan. “This draft Bay Delta Conservation Plan (BDCP) continues to ignore the very real concerns expressed by northern California stakeholders," wrote Congresswoman Doris Matsui (D-Sacramento) in a joint statement with several other legislators opposing the tunnels.
The $14 billion dollar tunnels would be paid for by water agencies, while the public would be on the hook for habitat restoration. More details on the costs are expected next month.
at 6:34 PM