California Democratic Rep. John Garamendi — who represents a key Northern California swing district near Sacramento — said today that Congress should “stop talking and take action” on President Obama’s gun proposals.
In the 113th Congress, “we have the debt ceiling and sequestration and God knows what else. We have a lot of things to deal with,” he said in a phone interview Thursday. He calle      Dear Congressman, if you really listen to our concerns, you would know that it is not about the laws themselves, it is more about who is dictating those laws that concern Americans who love the Constitution, and have learned of it's original intent and purposes. It is not the central federal government's place to dictate the laws that the Constitution has explicitly granted to the individual states. So not to be redundant this letter from Thomas Jefferson will speak for us all:d for the House to quickly deal with the gun safety issue with “an up or down vote — and move on.”
“If I were a Republican, I’d put this on the floor now and force the Democrats to stop talking — and take action,” he said. “If I were a Democratic leader, I’d do the same: ‘OK guys, let’s see where you stand. Let’s hold each of us accountable.”’
Because “at the end of the day, only a handful of people and minds are going to be changed,” he said. CA CD-3, which he represents, has a robust percentage both rural voters and Republicans, and Rep.Garamendi says he is listening to their concerns.

Dear Congressman, if you really listen to our concerns, you would know that it is not about the laws themselves, it is more about who is dictating those laws that concern Americans who love the Constitution, and have learned of it's original intent and purposes. It is not the central federal government's place to dictate the laws that the Constitution has explicitly granted to the individual states. So not to be redundant this letter from Thomas Jefferson will speak for us all: 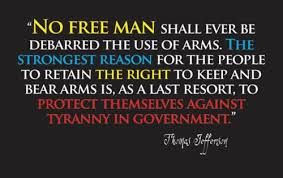 Thomas Jefferson, in the Draft of the Kentucky Resolution, 1798:

... the Constitution of the United States, having delegated to Congress a power to punish treason, counterfeiting the securities and current coin of the United States, piracies, and felonies committed on the high seas, and offenses against the law of nations, and no other crimes whatsoever; and it being true as a general principle, and one of the amendments to the Constitution having also declared, that "the powers not delegated to the United States by the Constitution, nor prohibited by it to the States, are reserved to the States respectively, or to the people," therefore the act of Congress, passed on the 14th day of July, 1798, and intituled "An Act in addition to the act intituled An Act for the punishment of certain crimes against the United States," as also the act passed by them on the ‑‑ day of June, 1798, intituled "An Act to punish frauds committed on the bank of the United States," (and all their other acts which assume to create, define, or punish crimes, other than those so enumerated in the Constitution,) are altogether void, and of no force; and that the power to create, define, and punish such other crimes is reserved, and, of right, appertains solely and exclusively to the respective States, each within its own territory.

This is the classic Jefferson quote in which he succinctly states the constitutional limits on the powers of the central government to prosecute persons under criminal law for acts committed on state territory. He does not get into the "general legislative powers" of Congress over federal territories, which have been reasonably interpreted to allow broad criminal jurisdiction, but the Constitution clearly states that such jurisdiction extends only to territory not the territory of any state. One might also argue that the constitutional provision that empowers the federal government to guarantee to the States a republican form of government confers powers of criminal prosecution in the event that the federal government had to step in temporarily to govern a state in which government had failed to maintain a republican form, in which case it would be governing the state as a kind of federal territory for the duration of the emergency. The only other exception is a power to discipline military personnel for acts they might commit, including those on state territory. However, this power would not extend to nonmilitary government officials, who would be subject only to federal civil remedies or removal from office, or criminal prosecution under state law.
Federal "territory" does not include property owned in fee simple by the federal government that lies within state territory, nor property on which activities are otherwise subject to regulation as interstate commerce or for excise or import taxation, neither of which create "federal territory" unless the land has been ceded to the federal government by the state legislature, nor do the powers to regulate or tax provide authority for criminal penalties (deprivation of life or liberty), only for civil penalties (deprivation of property).
Apply this standard to most of the statutes passed during the last 60 years or to the federal agencies and regulations established during that period, and it is clear why constitutionalists see a conspiracy to incrementally overthrow the Constitution. The constitutional guarantees of civil rights won't protect us if the restrictions on governmental powers are not strictly enforced. Those who imagine they can support only the provisions they like and ignore violations of others are deluding themselves.
Citizens have failed to do their duty to independently determine the constitutionality and legality of official acts. They have been all too willing to delegate that duty to courts, superiors, or legal advisors. The Principle of Nuremberg is that the duty to make such a determination cannot be delegated. The U.S. Constitution was meant to be understood and enforced by every citizen, according to the intent of the Framers, and not according to the passions of the moment. We have seen what happens in other countries, like the old Soviet Union, when an otherwise good constitution is not enforced by every citizen. This is especially important when courts become corrupt, and interpret the Constitution in ways that serves not the people but their would-be masters.