"Oregon has enjoyed a reduction in crime that has lasted for nearly two decades.  This has meant that Oregonians are much safer today than they were in 1990 with the violent crime rate falling by 49 percent, and has been broad enough to mean less crime from homicide to shoplifting.  The pessimism with which criminologists looked at crime control in the 1970s has been replaced with optimism about crime control in line with this improved trend. However, crime is still very difficult to predict and there are no
simple indicators of crime.  The commonly assumed relationships between incarceration, the economy, and crime are not consistent.  As researchers continue to debate crime indicators and causes, we seek to inform Oregonians of the crime reductions in their state."  Criminal Justice Commission, State of Oregon, http://www.oregon.gov/CJC/docs/crime_report_2010.pdf 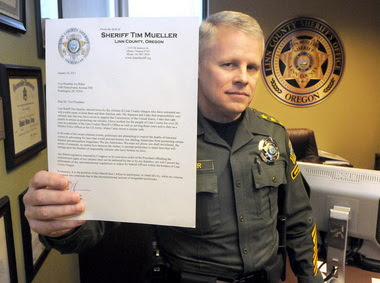 View full sizeLinn County Sheriff Tim Mueller holds a copy of the letter he sent to Vice President Joe Biden this week, saying that his department won't enforce any federal laws that would aim to disarm law-abiding citizens.Mark Ylen/Albany Democrat-Herald

As the discussion of stricter firearms laws percolates in Washington, D.C., a growing chorus of the state's sheriffs – from Grant, Josephine, Linn, Washington, Coos, Jackson, Douglas and Curry counties – are all sharing a similar message, be it in letters to Vice President Joe Biden or on social media sites like Facebook:
We will not enforce any new gun laws that infringe on the rights of citizens to keep and bear arms.
And the Oregon sheriffs aren't alone: Similar statements have been issued from Utah and Colorado to Georgia and Mississippi.
Still, as serious and solemn as some of the statements sound, they don't amount to much for now -- and may not ever come into play. In fact, at least one legal expert says the letters and news releases that have been issued this week appear designed to assure voters that local officials will not be involved in taking anyone's guns away.
More
Continuing coverage of gun control in Oregon and across the United States.
But one letter -- written by Linn County Sheriff Tim Mueller and sent to Biden -- does stand out because it goes a step further than most of the others: Mueller declared that he would not permit federal law enforcement officials to enforce such a law in Linn County.

"In summary, it is the position of this Sheriff that I refuse to participate, or stand idly by, while my citizens are turned into criminals due to the unconstitutional actions of misguided politicians," Mueller said. His comments were shared more than 57,000 times and 48,000 "likes" on Facebook.
Mueller could not be reached for comment on Friday.
But Tung Yin, a law professor at Lewis & Clark Law School in Portland, says Mueller may be walking on thin legal ice.
"It's one thing for the sheriffs to say, 'We're not going to lift a finger to help you take guns away from our people,'" said Yin. "That's OK. It's another thing for the sheriffs to say, 'Not only are we not going to lift a finger to help you, we're going to do everything we can to stop you.'"
Yin said a sheriff interfering with federal agents enforcing federal laws would run afoul of the supremacy clause in Article 6 of the U.S. Constitution, which says federal law trumps state law, even state constitutions. "Whatever view that the sheriffs have of the Second Amendment would have to give way to the federal law," Yin said.
Washington County Sheriff Pat Garrett's letter, addressed to citizens of Washington County, states he doesn't think "any branch of the federal government will unilaterally be successful in passing law that restricts your Second Amendment rights."
Garrett also wrote in his letter that "I do not support action that would prevent law abiding Washington County citizens from possessing certain firearms or ammunition magazines."
Multnomah County Sheriff Dan Staton, who issued his statement Thursday, was a bit more reserved than some of the other sheriffs. He said he also would support the rights of citizens granted by the Constitution.
His spokesman Lt. Steve Alexander said Staton plans to take a more measured approach to any new laws.
"The sheriff is saying that there has been a lot of reaction, a lot of knee-jerk reaction, but he wants everyone to know he supports the rights of citizens," Alexander said.
Amanda Marshall, United States Attorney for the District of Oregon, said the issue of enforcing federal laws at the county level is ongoing, especially in rural areas where the Bureau of Land Management and the U.S. Forest Service have a law enforcement presence.
Marshall said Oregon sheriffs are tapping into a larger movement around the country called "Sheriffs First," which basically posits that only sheriffs have the ultimate right to enforce laws in their counties.
The group has introduced legislation in several states, according to its website, that would "make it a state crime for any federal agent to make an arrest, search, or seizure within the state without first getting the advanced, written permission of the elected county sheriff of the county in which the event is to take place."
"They are riding a strong wave of support," Marshall said. But she questioned the strident nature of their protestations.
"We can't afford not be on the same page if we want to keep the community safe," Marshall said. "I have reached out to facilitate a productive dialogue."
To that end, Marshall said, she has attended every quarterly state sheriffs meeting since taking office in October 2011.
Crime is down in these rural counties where it is still common place to see open carry, and "Protected by Smith & Wesson" stickers everywhere. While the populated larger cities are democratic strongholds that control state politics, rural Oregon is very conservative and independent. When one gun rights advocate was asked the question: "What if  the liberal controlled state legislature passes harsher gun laws? He answered, "If it's unconstitutional, our Sheriff won't enforce them. Besides, they are the ones that are surrounded."
at 3:10 PM