While federal officials, corporate agribusiness interests, sleazy politicians and others have done an “admirable” job in their war against fish and fishermen, there are two detested public figures that stand out above all of the rest – Governor Jerry Brown and Natural Resources Secretary John Laird. Just like Obama has continued and expanded the abysmal fish and water policies of GW Bush, Brown and Laird have continued and expanded the abysmal policies of Arnold Schwarzenegger. 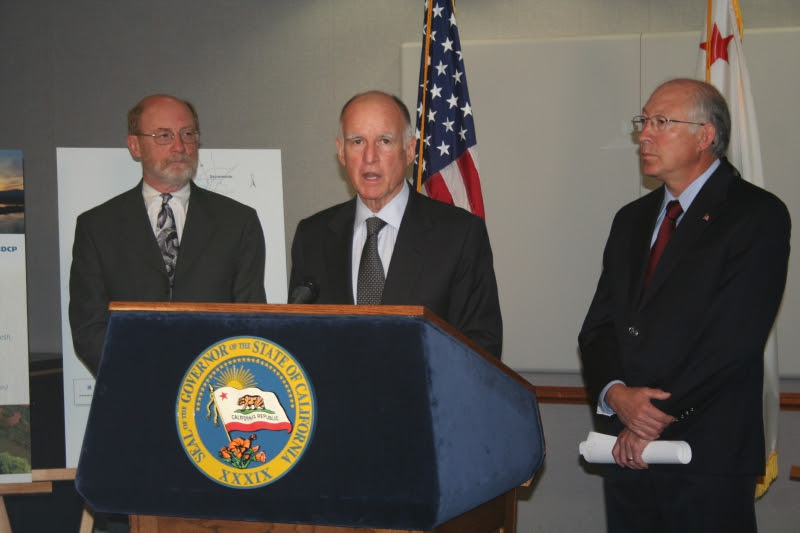 In my many years of reporting, 2012 was one of the biggest for the future of fisheries and the environment in California. Unfortunately, much of the news wasn’t positive.

The year began and ended with milestones in the implementation of the privately funded Marine Life Protection Act (MLPA) Initiative on the California coast. The marine protected areas for the South Coast, created under the helm of a big oil lobbyist, went into effect on January 1, 2011.

Then the DFG surprisingly announced in December, in a series of press releases, that the “marine protected areas on the North would go into effect weeks earlier than expected on December 21, supposedly completing the network along the entire California coast. These MPAs went into effect, in spite of the fact that they based on “incomplete and terminally flawed science” and violate the Yurok Tribe's traditional gathering rights.

In other bad news, the Brown and Obama administrations jointly announced their plan to go forward with the Bay Delta Conservation Plan to build the fish-killing peripheral tunnels on July 25.

In the same vein, the fall midwater trawl survey completed on December 31 by the CDFW revealed that the population of threadfin shad plummeted to its lowest ever number, while Sacramento splittail, longfin smelt and American shad reached their second lowest recorded abundance. Striped bass and Delta smelt hit their seventh lowest abundance levels.

More positive news took place on the salmon fishing front. Ocean anglers enjoyed the best fishing season on the California coast from April through November since the closure spurred by the collapse of 2008-2009. The river fishing was behind that of 2011, but still very good, particularly on the Feather River.

Now we go to our awards “ceremony” for those that did their best to destroy our fish populations, eviscerate fishing rights and lobby for corporate interests.

In a move widely applauded by anglers, Jane Lubchenco announced that she will be resigning from her position as NOAA Administrator under President Obama. Lubchenco was notorious for her “catch shares” program, a scam to make fishermen into sharecroppers by concentrating fisheries into fewer, more corporate hands. She receives the “Good Riddance, Jane” award for her efforts to privatize public trust fisheries.

Catherine Reheis-Boyd, President of the Western States Petroleum Association and chair of the Marine Life Protection Act (MLPA) Blue Ribbon Task Force for the South Coast, receives the “Oil and Water Don’t Mix” award. The unlikely “marine guardian” presided over the creation of alleged “marine protected areas” that fail to protect the ocean from oil drilling and spills, pollution, military testing, wind and wave energy projects and other human impacts other than fishing and gathering. Meanwhile, Reheis-Boyd was relentlessly pushing for offshore oil drilling, the expansion of the environmentally destructive practice of fracking, the construction of the Keystone XL Pipeline and the evisceration of environmental laws.

As "marine guardian" Reheis-Boyd lobbied for Big Oil, the Walton Family Foundation in April 2012 proudly reported "investments" totaling more than $71.4 million in "environmental initiatives" in 2011. These included contributions to corporate "environmental" NGOs pushing ocean privatization through "catch shares" programs and so-called "marine protected areas" like those created under Arnold Schwarzenegger's Marine Life Protection Act (MLPA) Initiative, as well as to groups promoting the destruction of the Delta through the construction of the peripheral tunnels.

The top five grantees were Conservation International, $16,208,278; Environmental Defense Fund, $13,683,709; the Marine Stewardship Council $3,122,500; Nature Conservancy $3,024,539, and the National Audubon Society, $2,739,859. For their role in corporate greenwashing in California and around the world, the Walton Family Foundation gets the "Walmarting the Oceans" award.

Westlands Water District, one of the consistent recipients of “Cold, Dead Fish”awards in past years and the largest water district in the world, is notorious as the “Darth Vader” of California water politics.They are the biggest pushers of the peripheral canal or tunnel and have launched numerous lawsuits to stop the restoration of salmon and other species on the Trinity, Sacramento and San Joaquin rivers.

However, they reached a new low in October when they masqueraded as the “Central Valley Tea Party” to instigate opposition to RTD’s film documenting the public subsidies of water for huge, unsustainable corporate agribusiness on the west side of the San Joaquin Valley.

“It is hilarious that Westlands – huge growers who receive millions upon millions of taxpayer dollars to subsidize their unsustainable practices wants to hide behind anti-tax groups. What utter hypocrisy,” summed up Barbara Barrigan-Parrilla, Executive Director of Restore the Delta. With this in mind, it is fitting that Westlands and Central Valley Tea Party are bestowed the “Corporate Welfare Queen” award for 2012.

Another corporate agribusiness interest that hides behind Astroturf groups is Stewart Resnick, the agribusiness tycoon who owns Paramount Farms including over 120,000 acres in Kern County. His Astroturf Group, the Coalition for a Sustainable Delta, launched a lawsuit in 2008 that attempted to exterminate striped bass, blaming them for the decline of Central valley salmon. The DFG and the Coalition reached a settlement to submit new regulations liberalizing striped bass size and bag limits to the Fish and Game Commission.

Fortunately, the California Fish and Game Commission, in a unanimous 4-0 decision, voted not to pursue a proposal that would have increased bag limits and decreased size limits for anadromous striped bass. For his underhanded action, Resnick is proudly given the “Dead, Rotting Striped Bass” award for 2012.

As Resnick's group attempted to exterminate striped bass, Representative Jeff Denham (R-Modesto) did the bidding of corporate agribusiness by introducing legislation, HR 2578, to strip wild and scenic status from a section of the Merced River above Lake McClure in order to expand capacity of the reservoir.

The measure passed the House but hasn't been taken up yet by the Senate. "It takes incredible gall to think you can just put reservoirs on permanently protected rivers," said Ron Stork, policy director for Friends of the River. Denham receives the "Vandalizing Our Legacy" award for initiating a campaign to begin carving pieces out our national wild and scenic system for the first time in U.S. history.

The “Nuke the Whales” award goes to the Pacific Gas and Electric Company for developing a seismic testing plan off the Diablo Canyon Nuclear Power Plant that would kill or injure untold numbers of whales, dolphins, salmon, rockfish and other species. Fortunately, the California Coastal Commission, under pressure from a big coalition of fishermen, tribal members and environmentalists, voted unanimously on November 14 to reject the company’s plan.

The Metropolitan Water District (MWD) of Southern California voted on December 11 to include raising of Shasta Dam as one of its "legislative priorities," a move opposed by the Winnemen Wintu Tribe, fishermen and environmentalists because of the dire threat dam expansion poses to the Tribe's cultural sites and Central Valley salmon populations. The board voted to support "administrative/legislative actions to remove existing prohibition for state funding to raise Shasta Dam."

"An 18.5 foot dam raise would damage or flood about 40 of our sacred sites, and permanently submerge our Coming of Age ceremony site," said Caleen Sisk, Chief and Spiritual Leader of the Winnemem Wintu Tribe. For supporting the Shasta Dam raise, MWD easily wins the "Cultural Genocide" award of the year.

Meanwhile, the Obama administration is continuing and expanding some of the worst environmental policies of the Bush administration, including exporting record amounts of water out of the Delta, killing record numbers of fish at the Delta pumping facilities in 2011 and promoting the privatization of the fisheries through the "catch shares" program.

However, the administration exceeded its already horrendous record when on December 21, the US Food and Drug Administration (FDA) released a draft environmental assessment (EA) finding, in spite of much evidence to the contrary, that genetically engineered (GE) AquaAdvantage salmon pose no risk to the environment. For tentatively approving this questionable genetically engineered animal, President Barack Obama and the Food and Drug Administration earned the coveted “Frankensalmon” award for 2012.

While federal officials, corporate agribusiness interests, sleazy politicians and others have done an “admirable” job in their war against fish and fishermen, there are two detested public figures that stand out above all of the rest – Governor Jerry Brown and Natural Resources Secretary John Laird. Just like Obama has continued and expanded the abysmal fish and water policies of GW Bush, Brown and Laird have continued and expanded the abysmal policies of Arnold Schwarzenegger.

First, Brown and Laird have fast-tracked the Bay Delta Conservation Plan to build the peripheral tunnels. This plan will hasten the extinction of Central Valley Chinook salmon, Delta smelt, longfin smelt and other fish species, according to agency and independent scientists alike.

Second, Brown and Laird continued the Marine Life Protection Act Initiative started by Governor Schwarzenegger in 2004. Shamefully, the DFG and Resources Agency have issued press release after press release failing to mention the conflicts of interest, failure to comprehensively protect the ocean, shadowy private funding and incomplete and terminally flawed science that have made the MLPA Initiative into one of the most sickening examples of corporate greenwashing in California history.

Third, Brown and Laird and Brown presided over record water exports to corporate agribusiness and Southern California in 2011, resulting in the "salvage" of a record 9 million Sacramento splittail and over 2 million other fish including Central Valley salmon, steelhead, striped bass, largemouth bass, threadfin shad, white catfish and sturgeon.

Other environmental policies of the Schwarzenegger administration that Brown and Laird have continued include engineering the collapse of six Delta fish populations by pumping massive quantities of water out of the Delta; presiding over the annual stranding of endangered coho salmon on the Scott and Shasta rivers; clear cutting forests in the Sierra Nevada; supporting legislation weakening the California Environmental Water Quality Act (CEQA); and embracing the corruption and conflicts of interests that infest California environmental processes and government bodies ranging from the Bay Delta Conservation Plan to the regional water boards.

Brown and Laird proudly receive the “Cold, Dead Fish Awards” for 2012 for continuing and expanding Arnold Schwarzenegger’s war against fish, fishermen and tribal communities in their devotion to corporate interests. Congratulations, Jerry and John!
at 8:40 AM