Photo of chinook salmon by the Department of Fish and Wildlife. If the peripheral tunnels are built, Californians can expect to see imperiled Central Valley chinook salmon, along with Delta smelt, longfin smelt, Sacramento splittail and other species, become extinct. 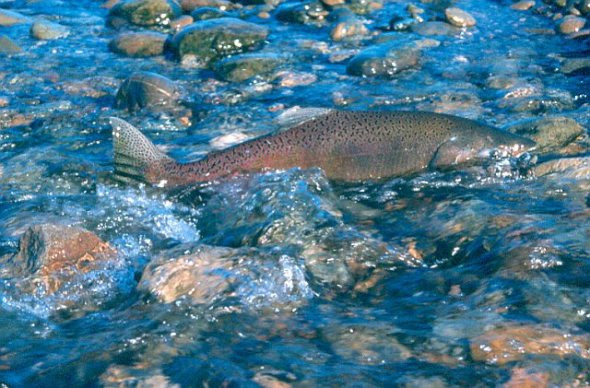 Three prominent environmental coalitions - Friends of the River, the Environmental Water Caucus and Restore the Delta - slammed the Brown Administration today for "squandering the opportunity" to create a Delta Plan that would "restore and heal" the Delta through implementation of the Delta Stewardship Council’s efforts.

In a public hearing, Bob Wright of Friends of the River accused the Brown Administration, including its Delta Stewardship Council and Department of Water Resources, of failing to balance the co-equal goals of restoring and protecting the Delta while improving water supply reliability by “ignoring the water flow needs for ecosystem restoration in the Delta."

This is a critical time for the Sacramento-San Joaquin River Delta, the largest estuary on the West Coast of the Americas. The announcement by the groups follows in the wake of last week's release of the results of a Department Fish and Wildlife trawl survey on the Sacramento-San Joaquin River Delta that revealed the continued collapse of six fish species, due to massive water exports from the estuary.

The number of threadfin shad was the lowest on record, while population levels of longfin smelt, American shad and Sacramento splittail were the second lowest on record. Delta smelt, an endangered species, and striped bass reached their seventh recorded abundance levels. (http://www.fishsniffer.com/fishingnews/details/delta-fish-populations-reach-record-low-levels,http://www.elkgrovenews.net/2013/01/delta-fish-populations-reach-record-low.html)

Representatives of fishing groups, Indian Tribes and environmental organizations point out that the twin peripheral tunnels that the Governor plans to build will push already imperiled Central Valley chinook salmon, Delta and longfin smelt and other fish species over the abyss of extinction by diverting more water from the estuary.

According to Wright, “The Delta Plan, as it stands right now, is set to incorporate without proper analysis the building of two massive tunnels as proposed in the Bay Delta Conservation Plan (BDCP) - both 33 feet wide, 35 miles long, and 150 feet deep - with a capacity to take 15,000 cubic feet per second (cfs) of fresh water out of the Sacramento River upstream from the Delta near Clarksburg to transport to the pumping plants near Tracy. That is an enormous quantity of freshwater, constituting the entire average flow of the River during the summer.”

Nick Di Croce of the Environmental Water Caucus, a coalition of more than 30 conservation, tribal, fishing and consumer protection groups, told the Council that its “Plan” for the Delta is deficient in several essential areas.

“The ‘Plan’ fails to address the root cause of the ‘unreliability’ of Delta water, which is the commitment of state and federal agencies to water rights and water contract amounts for far more water than is typically available from the Delta," said Di Croce. "One of two legally mandated goals of the Delta ‘Plan’ is to assure water supply ‘reliability.’ But it can never be achieved without this analysis. The costs and benefits of the ‘Plan’ are nowhere in sight.

He emphasized that the Public Trust doctrine is the foundation of state water management. "It ensures that the values of export water are balanced and compared to the benefits of rivers, estuaries, wildlife, and recreational values. Shame on the Council for not living up to their responsibilities," Di Croce explained.

“Given that salinity intrusion is already a huge problem now for the Delta, and will worsen greatly as a result of changing conditions, including climate change, the plan to benefit the exporters by adding new massive diversions of freshwater upstream from the Delta would be a ‘double whammy’ and likely the final nail in the coffin for the Delta,” stated Wright. “Presently, the exporters, including the wealthy, powerful, and massively subsidized large growers in the Westlands Water District and Kern County Water Agency, divert the water they take from the southern end of the Delta. The Delta obtains some freshwater benefits of the water before it is taken, as it does flow through the Delta."

"The large interests exporting the water presently share some of the interest of the Delta in keeping salinity intrusion from becoming too great as, like the people in the Delta, they are drawing their water from the Delta also. If the Delta Tunnels are constructed, the exporters will be able to take massive quantities of freshwater upstream from the Delta unaffected by worsening salinity, leaving the Delta to become a polluted and salty wasteland. We are fighting so hard to try to stop the Delta Tunnels because we are trying to save the Delta from that fate," said Wright.

Wright also noted that all responsible agencies and organizations know that too much freshwater is already taken from the Delta.

A different portion of the draft Delta Plan admits that as a result of climate change, “Sea level rise, as much as 55 inches by 2100 (OPC 2011), will result in high salinity levels in the Delta interior, which will impair water quality for agricultural and municipal uses and change habitat for fish species.” (Delta Plan 80).

“The State is not requiring the exporters to pay for attempts to mitigate the massive worsening of salinity intrusion that would occur because of the new diversions of water upstream,” said Wright. “Their plan is to stick the taxpayers with the mitigation costs. So far, they have pulled a proposed bond measure from the ballot twice out of fear that the bond measure would be defeated at the polls."

Wright argued, "This entire process is not only an outrage against the environment and the Delta. It is also an outrage against the people and the taxpayers of California. The people voted down the peripheral canal back in 1982 by a 63-37% vote. It is gross hiding the ball by the State in league with the exporters to renew the peripheral canal plan, this time in the form of the Delta Tunnels, which would destroy the Delta by converting it from a freshwater body to a saltwater body with one hand, while with the other hand they attempt to impose the costs of attempting to mitigate this looming environmental disaster on the taxpayers. The exporters would gain the benefits of grabbing the freshwater while the Delta and the taxpayers would reap the pain in the form of environmental destruction and higher taxes.”

Wright said the only true cost-benefit study of the Delta Tunnels project that has been prepared is the study done by the Eberhardt School of Business, University of the Pacific. That study demonstrated that the costs of the Delta Tunnels would be 2.5 times higher than the benefits, so that the project does not make economic or financial sense.

"In the most recent round of drafts released by the Council, the cost-benefit study is not even mentioned, let alone analyzed," stated Wright. "The Delta Tunnels Project would inflict an environmental disaster upon the Delta; the perpetrators of this disaster seek to inflict all costs of attempting to mitigate this disaster on the taxpayers; and the project would reach great heights of absurdity by carrying out environmental harm and destruction while at the same time not making economic or financial sense. The exporters and their puppets in the State administration, are attempting to perpetrate a ‘hat trick’ of bad things on the Delta and the taxpayers."

Di Croce also criticized the Council’s failure to meet the requirement that the plan “recover” the Delta.

“The high level of water exports from the Delta over the last few decades has brought on the decline of the Delta ecosystems. But the Delta ‘Plan’ is paving the way for a water-tunneling project whose intent is to allow more water to be exported from the Delta. How can taking more water out of the Delta recover it?” Di Croce concluded.

Governor Jerry Brown and Natural Resources Secretary John Laird have continued and expanded the worst environmental policies of the Schwarzenegger administration, including the Bay Delta Conservation Plan to build the peripheral tunnels, allowing them to easily win the "Cold, Dead Fish" Awards for 2012 (http://www.dailykos.com/story/2013/01/09/1177724/-Cold-Dead-Fish-Awards-2012-Go-To-Jerry-Brown-Secretary-John-Laird)

The Brown and Obama administrations also continue to openly violate the historic Central Valley Project Improvement Act, passed by Congress in 1992, that set a goal of doubling the Bay-Delta watershed’s salmon runs from 495,000 to 990,000 wild adult fish by 2002. A Natural Resources Defense Council (NRDC) and Golden Gate Salmon Association (GGSA) analysis, published in the Salmon Doubling Index, reveals a steady decline in Bay-Delta Chinook salmon from 2003 through 2010, at which point it reached a record low of 7 percent. The Central Valley Chinook salmon fishery now stands at only 13 percent of the population goal mandated by federal law.

The Salmon Doubling Index graphic and a table listing the index by year can be found here: http://switchboard.nrdc.org/blogs/kcoplin/Salmon%20Index%20Chart%20and%20Table.pdf
at 6:36 PM