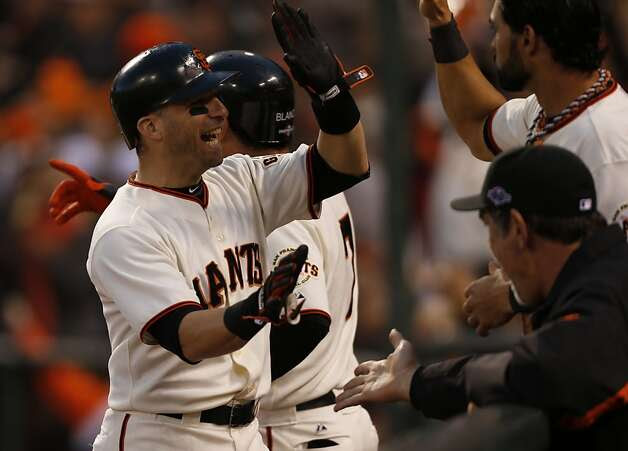 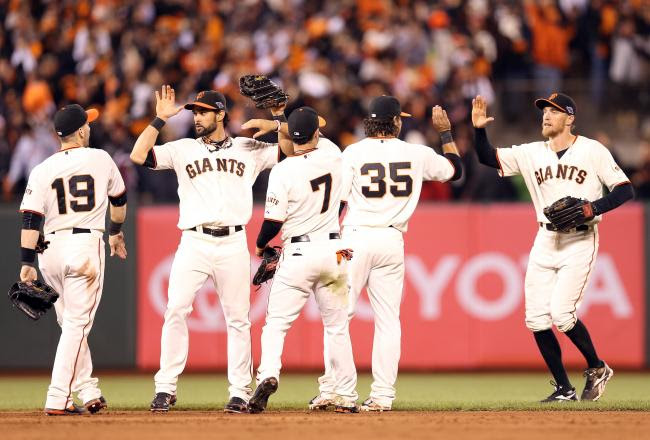 SAN FRANCISCO — The comeback kings will play for baseball's greatest crown.
The Giants blew past the St. Louis Cardinals on Monday, winning 9-0 in Game 7 of the National League Championship Series to complete a second straight historic comeback and advance to the World Series for the second time in three seasons. The Giants are the first team in MLB history to win six elimination games en route to the World Series, having overcome from a 2-0 deficit in the best-of-five series against Cincinnati and a 3-1 deficit in this series against St. Louis.
So it's on to the World Series, against the Detroit Tigers. Game 1 is Wednesday at AT&T Park.
The Giants roared to victory Monday behind the predictable and the unbelievable. Matt Cain shut the Cardinals out for 5 2/3 innings and Marco Scutaro went 3 for 4 to tie an LCS record with 14 hits in a series. But the game turned on Hunter Pence's three-run double that appeared to literally turn in midair.
The Giants led 2-0 heading into the third inning and promptly knocked Kyle Lohse out of the game with a Scutaro double, Pablo Sandoval double and Buster Posey walk that loaded the bases. Joe Kelly entered to face Pence, who has sparked the comebacks with fiery speeches but entered Game 7 with just one postseason RBI.
On Pence's first day after being traded to San Francisco from the Philadelphia Phillies, the right fielder smiled and warned reporters, "I have to be honest, every now
Advertisement

and then, I do things you don't see very often."

That turned out to be the understatement of the season.
Pence broke his bat on a 95 mph fastball but the ball hit the bat three times, once at contact and twice as Pence followed through with a shattered bat. The result was a knuckleball to shortstop, and Pete Kozma initially broke to his right before unsuccessfully sprawling back to his left as the ball shot into the outfield.
Scutaro and Sandoval scored easily, and Posey, who couldn't even run when spring training began, sprinted home when John Jay overran the ball in center.
In an all-hands-on-deck game, the Cardinals appeared frozen while the Giants ran away with the pennant. Cardinals manager Mike Matheny left Kelly, his long reliever, in to face a string of Giants left-handed hitters. Brandon Belt's sharp grounder was deflected by Kelly, allowing Pence to reach third and Belt to safely get to first.
After Gregor Blanco walked, Brandon Crawford hit a grounder behind the mound and Kozma inexplicably elected to throw home. The rookie's throw was not in time and Pence scored to make it 6-0.
Angel Pagan hit a sharp grounder to short two batters later but Kozma's high feed to second baseman Daniel Descalso allowed Pagan to beat the relay throw to first as Belt scored. The five-run outburst marked the fifth time in the NLCS that the Giants scored at least four runs in one inning.
By the time one of the strangest rallies in postseason history was over, the Giants led 7-0.
Cain was shaky at times, but got plenty of help from his defense. Crawford made the biggest contribution, a leaping stab of a Lohse liner with two outs and two runners in scoring position in the second inning. Blanco and Scutaro also contributed rally-killing gems as the Cardinals went 0 for 7 with runners in scoring position through Cain's 5 2/3 innings.
Cain put two runners on in the sixth before giving way to Jeremy Affeldt, who got Descalso to pop up to end the threat on a night when the Giants were hardly challenged.