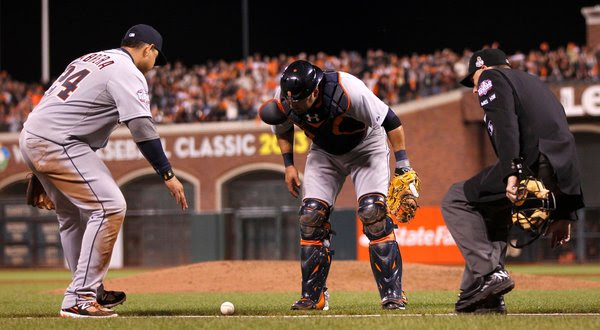 Keep up with the latest news on The Times's baseball blog.
Go to the Bats Blog 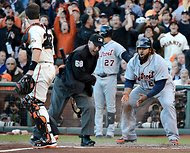 The Tigers’ Prince Fielder, right, after being called out at home in the second inning. More Photos »
Hosting three previous games here this week, the San Francisco Giants had stuck closely to a carefree pattern, scoring early and scoring big, to establish a lasting tone of revelry inside AT&T Park. They beat the St. Louis Cardinals twice, 6-1 and 9-0, to earn their World Series berth. They then downed the Detroit Tigers, 8-3, during Game 1 on Wednesday night. It was, in all, a rollicking good time.
But even if the tightly contested Game 2 possessed a wholly different mood, the end results — deafening cheers, swirling orange towels, contented fans — were the same, as the Giants slipped away with a 2-0 win, earning their first run, which was all they needed, on a run-scoring double-play ball late in the game. Afterward, the Giants and their fans felt another different sensation, because for the first time in 2012, they had a solid lead in a playoff series. The teams meet again at Comerica Park in Detroit for Game 3 Saturday night.
The tension did not break until the seventh inning. Hunter Pence started things by slipping a single through the left side of infield. Brandon Belt came up against reliever Drew Smyly and drew a walk. After that, Gregor Blanco tried to push a sacrifice bunt down the third-base line and came up instead with an infield single when the ball came to a stop inside the chalk.
With the bases loaded, Brandon Crawford drilled a grounder to Omar Infante, who was playing deep and opted to turn the double play, letting the go-ahead run score.
That produced the loudest cheer of the game. There was excitement before that, to be sure, but on this night there were no towering home runs, no swashbuckling rallies. Taking their place were bang-bang outs, close calls, near misses and a long string of zeroes. That continued one recent staff trend for the Giants: the team’s starters are 5-0 with a 0.55 earned run average in the last five games.
The Giants looked like they were in trouble in the second inning. Madison Bumgarner hit Prince Fielder on the right arm with a pitch and then gave up a hard-hit ball down the left-field line to Delmon Young. The ball careened off the wall there, sending Gregor Blanco the wrong way and emboldening Gene Lamont, the Tigers’ third-base coach, to wave Fielder home. But the relay from Blanco to second baseman Marco Scutaro to catcher Buster Posey was perfect, and Fielder was punched out on a sweeping tag.
Fielder protested, crouching down before popping up again and crossing his arms over his chest. Jim Leyland, the Tigers’ manager, came out to argue, too. Television cameras afterward showed Fielder pacing the dugout, cursing loudly to himself.
The bottom of that inning produced a nervous moment, when Blanco lined a changeup from Doug Fister, the Tigers’ starter, back toward the mound. Fister could not get his 6-foot-8 frame out of the way, and the ball glanced off the ride side of his head, looping high into center field for a single.
Fister, looking unfazed, remained in the game and received a round of applause from the home crowd. He gave up a walk after that, loading the bases. But he induced a popup from Bumgarner, who failed to give the Giants a fifth straight game in which their starting pitcher drove home a run.
Bumgarner provided a glistening outing on the mound, one that seemed unlikely before the game. The 23-year-old Bumgarner was making his first appearance since his Oct. 14 loss against the St. Louis Cardinals. Over his two starts this postseason, he managed only eight total innings while giving up 15 hits and 10 runs. The Giants attributed the bad outing to some mechanical issues, which they tried to fix over subsequent days.
If Thursday’s results were an indicator, something was fixed. Bumgarner zoomed down the Tigers’ order, allowing two hits over seven scoreless innings, striking out eight. Starting pitchers for the Giants have allowed a total of two runs during the team’s last five games.
Fister, 28, a native of nearby Merced, Calif., matched him for most of the way, allowing one base runner from the third inning through the sixth. He was removed, 114 pitches under his belt, after allowing a single to Pence to open the seventh, and he was charged with the run when Pence came around.
Pence floated a sacrifice fly to right field off Octavio Dotel in the eight, providing slim insurance. The runs proved sufficient, as the Giants’ bullpen held on, pitching for once this week with tension filling the park until the last out. Bucking another recent trend, the Giants charged to a commanding series lead.
at 9:36 PM