U.S. Media plays down tragedy for Obama's popularity sake! Media had these

photo's for hours, but any news that may be detrimental to Democratic ticket waits 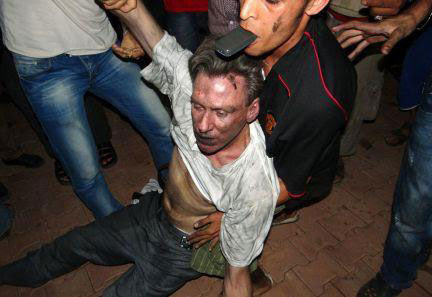 Ambassador Chris Stevens was killed during the assault on the US consulate in Benghazi.


This graphic picture has emerged online of Libyan civilians dragging the unconscious body of Chris Stevens, the US ambassador who was one of four diplomatic staff killed during an attack on the American consulate in Benghazi.
The picture appears to show the civilians dragging Stevens through the streets in search of help, after the attack which ultimately killed him as well as three other staff, including information management officer Sean Smith.
Although the precise circumstances of Stevens's death remain unclear, it is thought that 52-year-old Stevens went to the US consulate in Benghazi a few hours after the initial attack on the compound.
Reports suggest that Stevens, Smith and their bodyguards were attacked in their car. The ambassador eventually died of suffocation.
The attack was prompted by the release of an Islamophobic film entitled Innocence of Muslims, which was produced in the US state of California and directed by Israeli-American Sam Bacile.
Follow us

The US secretary of state Hillary Clinton has expressed "profound sadness" over the Benghazi attack, while President Barack Obama said he had ordered "all necessary resources to support the security of our personnel in Libya, and to increase security at our diplomatic posts around the globe".
In a White House statement, Obama called Stevens a "courageous and exemplary representative of the United States", adding: "I strongly condemn the outrageous attack on our diplomatic facility in Benghazi."
Nato's secretary general Anders Fogh Rasmussen decried the attack,saying that "such violence can never be justified" while welcoming "the Libyan president's condemnation and condolences and his pledge of his government's full cooperation."
Stevens, who spoke Arabic and French and had already served two terms in Libya, was confirmed as America's ambassador to the country earlier this year.
He joined the Foreign Service in 1991, spending his career at posts in Saudi Arabia, Egypt, Syria.
Stevens, 52, reportedly went to the US consulate in Benghazi on Wednesday morning to check the damage done overnight by armed militants protesting against an Islamophobic film entitled Innocence of Muslims produced in California, US.
His car was attacked, killing him and two bodyguards. Stevens reportedly died of suffocation during the attack.
The circumstances of his death remain unlear.
"The official said the ambassador and three other staff were killed when gunmen fired rockets at his car," an unnamed official told Reuters.
at 7:30 AM