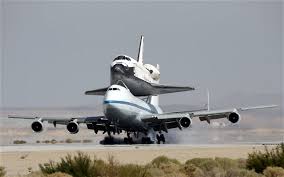 Endeavour to fly over Bay Area

San Francisco Bay area residents are slated to be among the last Americans who will get a chance to see the space shuttle Endeavor before it retires in a Los Angeles museum.

The shuttle is expected to fly near the State Capitol building in Sacramento just after 8:30 a.m. on Friday before passing over the Bay Area about an hour later. However, the times may change depending on weather.

The California Highway Patrol says prime places to watch the fly-over include the Exploratorium in San Francisco, Lawrence Hall of Science in Berkeley and Monterey Bay Aquarium.

The Endeavor logged more than 123 million miles in its 25 trips over two decades.

The California Science Center in Los Angeles, the shuttle’s new home, agreed to pay $28 million for the farewell tour.
LOS ANGELES Space shuttle Endeavour returned to its California roots Thursday after a wistful cross-country journey that paid homage to NASA workers and former Arizona Rep. Gabrielle Giffords and her astronaut husband.
“That’s my spaceship,” said Endeavour’s last commander, Mark Kelly, as the couple watched the shuttle loop over Tucson, Ariz.
Afterward, a 747 jet carrying Endeavour swooped out of the desert sky and glided down a concrete runway at Edwards Air Force Base, 100 miles north of Los Angeles, not far from where the now-retired shuttle fleet was assembled.
The shuttle and jumbo jet take off again at sunrise Friday to make low, sweeping passes over Sacramento, San Francisco, Silicon Valley and Los Angeles.
Next stop: Los Angeles International Airport where Endeavour will be prepped for a slow ride on a special flatbed trailer through city streets next month to its final destination as a museum showpiece.
Endeavour’s highly anticipated homecoming was twice delayed by stormy weather along the Gulf of Mexico. Early Wednesday, it departed from its Cape Canaveral, Fla., home base, soared over NASA centers in Mississippi and Louisiana, and made a layover in Houston, home of Mission Control. Crowds craned their necks skyward as the shuttle flew low over Florida’s Space Coast and Houston.
After refueling in El Paso, Texas, Thursday, it flew over the White Sands Test Facility in New Mexico, an emergency shuttle landing site used once. Kelly requested that Endeavour sail over Tucson to honor Giffords, who is recovering after suffering a head wound in a shooting rampage last year. Giffords was a member of the House committee on science, space and technology. The couple watched from the roof of a University of Arizona parking garage.
Former Giffords aide C.J. Karamargin said Giffords was “elated” and started “hooting and hollering” as soon as she spotted Endeavour.
Kelly said the flyover reminded him of how challenging it was to land the shuttle, because it doesn’t use its engines as it returns to Earth. “It doesn’t glide very well,” Kelly said.
at 1:02 PM