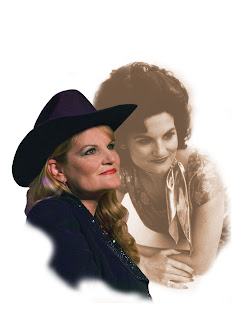 "Morris Has Cline Down Pat” said the newspaper headlines from the San Francisco Examiner of Joni’s most recent performance there.  And the San Francisco chronicle's Date Book section reads “It’s Patsy All Over Again” of her re-creation of the country and western legend, Patsy Cline, at the bay area’s Alcazar Theatre.
Tribute to Patsy Cline at Summerset Orchards
BRENTWOOD -- Summerset  Sept 15-2012
Advertisement
Orchards Lodge presents vocalist Joni Morris and her After Midnight Band on Sunday. Morris pays homage to one of the great female country singers of our time, Patsy Cline.

Along with the backup band, the show will feature the additional bonus of pedal steel guitar hall-of-famer Bobby Black, who has been featured with many top country groups.
The performance is at Summerset Orchards Lodge, 770 Centennial Place, with doors open at 2 p.m. Beverages will be available for purchase. Seating is at 2:30 p.m. and the music begins at 3 p.m. Tickets can be purchased at Lodge or at the door. Admission is $15. For tickets, call 925-513-2640
at 4:36 PM