Condoleezza Rice's inclusion on the Republican ticket would scramble the race in ways few other candidates could.
A new round of speculation about Mitt Romney's running-mate deliberations ensued after a media report mentioned an unconventional choice: former Secretary of State Condoleezza Rice.
The Drudge Report website set Washington ablaze in another round of the vice-presidential guessing game Thursday night by posting an item attributed to "sources" naming her as one of the top contenders to be the presumptive Republican nominee's running mate.
The item mentioned a fundraising email Ms. Rice, 57 years old, sent Thursday night on Mr. Romney's behalf as part of the campaign's "Meet the VP" drive, an initiative intended to increase the number of small-dollar donors in which the winners get to meet the candidate and his eventual running mate.

Palin: Rice Would Be 'Wonderful'

Fox News
If Romney's campaign was, in fact, responsible for floatingCondoleezza Rice's name as a possible running mate, they can now claim the support of the woman who held that distinction four years ago. In an interview Thursday night, Sarah Palin told host Greta Van Susteren that "Condoleezza Rice would be a wonderful vice president." Read more .
More on Rice:
No one in the Romney camp would confirm or deny the story, in keeping with the campaign's tight-lipped approach to the selection process. But it's possible the item was a trial balloon from the campaign attempting to gauge the reaction to Ms. Rice as a possible pick.
The report caused outsize fanfare because Romney campaign manager Matt Rhoades has a close working relationship with Matt Drudge, who launched the site in the 1990s and made his preference for the former Massachusetts governor clear during the Republican primary.
Mr. Rhoades sent an email to supporters late Thursday night alerting them to the campaign's latest fundraising push, telling the recipients, "Sometime between now and the Republican convention, Mitt will be announcing his choice for VP."
Earlier this week, Mr. Romney told a crowd in Grand Junction, Colo., "I can tell you…the person I choose, you will look at and say, well, that's a person who could be president, if that were necessary." He said, "And that, for me, is the most important single criteria."
Ms. Rice's assets are obvious: She's a woman; she's black; she has extensive foreign-policy experience; and her inclusion on the ticket would scramble the race in ways few other candidates could.
Her liabilities are also easy to cite: She has favored abortion rights, a position Mr. Romney has moved away from; she has never run for elected office; she waged frequent battles with former Vice President Dick Cheney; and many conservatives believe she was soft on Iran and North Korea policies during the George W. Bush administration.
Her tenure in that administration would also feed Democratic criticism that Mr. Romney represents another four years of Mr. Bush.
Still, in a CNN poll of Republicans in April, Ms. Rice drew the highest levels of support as a possible running mate.
Twenty-six percent of the respondents picked her, compared with 21% for former Pennsylvania Sen. Rick Santorum and 14% for both New Jersey Gov. Chris Christie and Florida Sen. Marco Rubio. The poll showed Ms. Rice to have an approval rating of 80%.

Take a look at some of the possibilities.
View Interactive 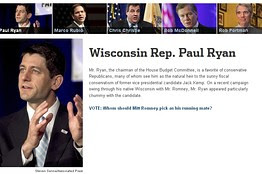 Conservative activist Bill Kristol said he was "ambivalent" about the idea of picking Ms. Rice, saying he has had some differences with her on foreign policy. But he cited her high approval ratings in polls and said, "As a cold blooded political matter, you look at that kind of number and what she could do for me, and you have to be a little bit tempted if you were Mitt Romney."
Mr. Romney has offered few clues about whom he will tap—or even when he would make the announcement. The only name he has confirmed is Florida Sen. Marco Rubio, an announcement made to refute news reports that said the first-term senator wasn't in the running.
Ms. Rice sparked vice-presidential speculation late last month by delivering a speech to Romney donors at a retreat for his top financial backers in Park City, Utah. But she quickly doused those rumors, telling CBS's "This Morning," "There is no way I will do this because it's really not me. I know my strengths and weaknesses."
at 10:40 AM