By Matt Weiser
Dozens of California state parks struck down by the budget ax are slated to close their doors in three weeks. Yet that process remains so unsettled that even state officials can't say with certainty how many parks will actually close. 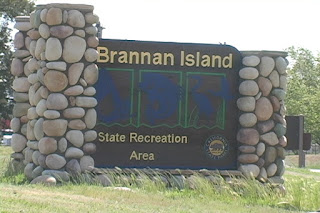 One year ago, the state Department of Parks and Recreation released a list of 70 parks that would be closed to achieve a $22 million savings in operational costs. The closures – unprecedented in the 150-year history of California state parks – are set to occur no later than July 1.
The uncertainty is a silver lining for park lovers. It means far fewer than the original 70 parks will close, because many local groups have raised money and rallied volunteers to rescue a state park in their community.
"If there's anything positive out of all this, it's that it's connecting local communities back with their parks, making people pay attention to them, and realizing they don't just take care of themselves," said John Woodbury, general manager of the Napa County Regional Park and Open Space District.
Woodbury's organization, in partnership with the nonprofit Napa Valley State Parks Association, signed an agreement with the state to operate two parks: Bothe-Napa Valley State Park and Bale Grist Mill State Historic Park.
The groups have an ambitious plan to turn the neighboring parks into a break-even operation after decades as a money loser for the state. Among other changes, they plan to return the campground to year-round operation, install 13 yurts as pricier overnight accommodations, and turn historic buildings into rentals.
Dozens of partnerships across the state are still in the works at this late date, partly because the state has never before handed over an entire park to a nonprofit group. It took months to resolve the legal issues and prepare contracts. And every such agreement is different, so a uniform approach was impossible.
Roy Stearns, a state parks department spokesman, said last week his agency's best estimate is that 22 parks have operating agreements signed with new partners that will keep them open. Such agreements are pending at 14 other parks.
So the worst case at the moment is that 48 parks would close, not 70. The number may drop to 34 – and possibly lower.
The state also is mulling concession contracts with private companies to operate other parks on the closure list. These numbers are even less certain because the most recent closing date for bids was just five days ago.
"We do not have a listing of what parks will close, as we are still in the process of seeking partners," Stearns said via email. "We shall not be putting a park on the closed list if there appears to be a deal in the works that is possible soon."

Brannan Island State Recreation Area is one Sacramento County park on the closure list that will end up in the hands of a private concessionaire. Four companies submitted bids to operate the park. The state chose American Land and Leisure of Utah.

Brannan Island is the only state park and public campground in the Sacramento-San Joaquin Delta. It is vital to the region's economy, said Bill Wells, executive director of the California Delta Chambers and Visitors Bureau.
"I think it's a disgrace the state is closing parks," Wells said. "But if (Brannan Island) has to go to a private operator to keep it open, I say OK. Whatever it takes."
For now, the Leland Stanford Mansion and Governor's Mansion state historic parks in Sacramento remain on the closure list.
"We'll just be absolutely crushed if it closes," said Sacramento County Supervisor Susan Peters, chairwoman of the Leland Stanford Mansion Foundation. "It is part of the historical fabric of the city of Sacramento. You punch a hole in that and it's like a punch to your gut."
However, a large private donation may be announced this week to keep the Governor's Mansion open. And a plan is in the works to keep the Stanford Mansion open by appointment, using state park docents who give tours at the Capitol.
Like the Stanford Mansion, most of the state's 278 parks have partner nonprofit associations that were limited to organizing volunteers who wanted to hold tours, classes and fundraisers. Stepping up to actually operate a park is an enormous challenge for these small groups. Most have never issued a paycheck or purchased insurance, for example.
"Right now, it's like all I'm doing is working on this," said Bob Berman, vice president of the Benicia State Parks Association, which aims to take over operations at Benicia Capitol State Historic Park on July 1.

Berman has lived and worked in Benicia as an environmental planning consultant for 37 years. He is now among hundreds of Californians working in the shadows to keep parks functioning.

The association – Berman's wife, Carol, is the president – submitted a proposal that was accepted by the parks department to operate the 1853 state Capitol building and an adjacent historic house. It is negotiating contract language with the state.
The group will provide $50,000 toward a total annual operating cost of about $100,000, Berman said. The remainder will come from visitor fees and $25,000 worth of grounds maintenance donated by the city of Benicia.
Publicity and concern about park closures has been a benefit to their efforts, Berman said. After operating for decades with just a few dozen members who were passionate about tours, the group recently recruited more than 300 dues-paying members in the community who want to help keep the park open.
The association plans to hire a park manager and visitor services aide to continue opening the park building on weekends. It hopes to add Friday hours to boost revenue.
One challenge for Berman's group and others is purchasing insurance, required in any operating agreement. The state, like many government agencies, has self-insured its parks. But this is not available to nonprofit partners, who face the daunting task of finding private insurance for virtually priceless parks.
"The insurance companies have to figure out what the replacement cost would be. It's a whole new experience," Berman said.
So far, it seems insurance requirements vary depending on the situation. Some groups are told to carry general liability insurance and coverage for cultural objects. Others are required to add fire insurance as well.

Transitions have gone easier where the state parks department remains in charge of operations. One example is South Yuba River State Park, where residents and park lovers mounted a campaign to persuade the state and Nevada County to require payment for day-use parking.

Visitors so far support the new $5 parking fee, said supervising ranger Don Schmidt, which is collected at a new kiosk staffed by part-time park employees, or at a self-payment "iron ranger" apparatus when the kiosk is closed.
The anticipated parking revenue kept the park from closing. But the money won't be enough to fill ranger and maintenance staff vacancies, or chip away at a long repair list.
The park covers more than 5,000 acres strung out in nine disconnected parcels along the river. It has two rangers on board, not the normal five. Staffing is merely adequate, Schmidt said, to prevent overflowing garbage cans, dirty bathrooms and other nuisances.
"When there just isn't somebody to do that job anymore, that's when people are going to see it," Schmidt said. "I would say, in this group of parks, we are right on that cusp. If we have any more retirements or transfers or anything like that, that's going to put us over."
Schmidt also oversees Malakoff Diggins State Historic Park, which will avoid closure this summer thanks to a $25,000 donation from the Malakoff Diggins Park Association. The money will keep the park open on weekends only through Labor Day. It is not enough to open the campground.
The association operates a store at the park. Closure of the campground will cut into revenue from selling firewood, ice and food that the association would otherwise use to support the park next year. So closure remains a possibility in 2013, said Wes Nelson, the group's president.
"Some of the expenses to operate the campground were more than we could handle," Nelson said. "We're hoping some magic rabbit will get pulled out of the hat before next year."
Several bills in the Legislature may provide that reprieve. Among other things, they would tap surplus highway funds and vehicle licensing revenue for parks. One bill would create a specialty license plate to generate revenue. Another would grant nonprofits immunity from liability in parks, lifting some financial burden.
A long-term solution remains urgent, said Traci Verardo-Torres, vice president of government affairs at the California State Parks Foundation, because even a small number of parks left untended will be at risk.
This was illustrated in February when vandalism and theft totaling at least $100,000 was found at historic Mitchell Caverns at Providence Mountains State Recreation Area in the Mojave Desert. The remote park had been closed and important artifacts removed. But two people, now facing felony charges in San Bernardino County, allegedly cut a lock on a gate, vandalized park buildings and stole equipment.
"It is fantastic that groups at this 11th hour are stepping up to help," Verardo-Torres said. "But all Californians need to understand: This is literally a strategy to buy some time."
Read more here: http://www.sacbee.com/2012/06/10/4550671/nonprofit-groups-scramble-to-keep.html#storylink=cpy
at 3:29 PM