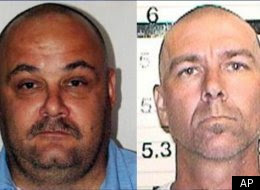 Linden Herald Correspondent
Finding two names to a well full of human remains adds more to the grim growing list of murders that continues the nightmare of the victims, their families and this community . Police said Friday that they had identified two long-missing teens whose bodies were dumped in that now infamous rural well more than 25 years ago by the aptly nicknamed duo, the "Speed Freak Killers."
Kimberly Billy was 19 when she went missing on Dec. 11, 1984. Joann Hobson disappeared Aug. 29, 1985, at age 16. Both were from east Stockton. On Friday, police said their skeletal remains had been excavated from a compacted well near Linden.
The bones were among 1,000 fragments investigators collected in recent weeks, and authorities said there may be more excavations from local wells - the preferred disposal choice for the killers.
Investigators excavated bones, clothes, purses, shoes and other evidence from the well outside Linden last month after condemned killer Wesley Shermantine provided hand-drawn maps from his cell at San Quentin to where he and late childhood friend Loren Herzog dumped their victims during a 15-year meth-fueled thrill-killing rampage.
"They finally get the closure they need," said Rob Dick, a private investigator who has worked with victims' families to keep the three-decade investigation active. "These families have been dying for answers."
The two deaths add to the violent toll of Wesley Shermantine and Loren Herzog, two methamphetamine users suspected of killing an unknown number of women. Their known victims include Chevelle Wheeler, 16, of Stockton, who was slain in 1985, and Cyndi Vanderheiden, 25, of Clements, who was killed in 1998.
Wheeler's remains were unearthed in a San Andreas burial site Feb. 10, a day after authorities found Vanderheiden's remains on a nearby property.
Herzog and Shermantine were convicted in 2001 of murdering Vanderheiden, Wheeler and others. Herzog, who was free on parole, killed himself early this year, while Shermantine remains on Death Row.
Shermantine, who was sentenced to death for four murders, provided the directions to bounty hunter Leonard Padilla in exchange for a promise of $33,000 to pay off a restitution order, buy headstones for his parents' graves, and acquire a television and other comforts.
Both accused each other for the murders and the truth may die with Shermantine at his execution. The piecemeal information he is slowly providing may turn out to be a stall tactic to keep his date with death at bay.Herzog was originally given a 77-year prison sentence, but it was struck down on appeal and he agreed to a plea deal ahead of a second trial. He was released in 2010 and was living in a trailer near the High Desert State Prison when he got word of Shermantine's cooperation with authorities. Herzog hanged himself in January, a day after learning that any discoveries would probably bring new charges against him and more prison time.In recent letters to news organizations, Shermantine claimed that he and Herzog had a third accomplice and that they killed 72 during their "hunting" expeditions that targeted prostitutes, runaways and drifters.
Herzog also implicated Shermantine in the shooting death of a hunter in northern Utah in 1994 while he and Shermantine were on vacation, according to what authorities told The Record newspaper. Law enforcement officials reportedly confirmed the hunter's death to the newspaper, and said that they were still treating his death as an unsolved murder.
Shortly after Herzog's and Shermantine's arrests, FBI agents raided Shermantine's parents' home in San Andreas and confiscated nearly $40,000 worth of guns, which were examined by evidence technicians attempting to link them to other unsolved crimes. The effort, however, appears to have been futile.
Shermantine, upon learning of Herzog's statements to police, struck back by insisting that Herzog, and Herzog alone, was to blame for Cyndi Vanderheiden's death. Shermantine also provided information implying that he might know the location of Vanderheiden's corpse and of other bodies.
Doug Jacobsen, Shermantine's attorney, showed Shermantine a copy of the videotaped interview that Herzog gave to police, prompting Shermantine to respond.
"The more I've heard about all the stuff I'm supposed to have done, the madder I get," Shermantine told a reporter for another newspaper. "I'm tired of being used and manipulated by Loren. If Loren can give details about all these murders, it must mean he's the one that did them. I'm innocent. I've done nothing wrong to any of these people....With everything Loren told the detectives, I'd bet my life there were other bodies out there."
So his previous claim of innocence is contradicted by his knowledge of all these locations he is conveniently remembering because of his hopes for reward money to buy a television, candy, canteen supplies, and whatever else inmate funds can get him.
It was reported by other media that authorities were also looking at Herzog and Shermantine as potential suspects in the 1994 murder of a woman in Tuolumne County. The woman's body had been dismembered and was found inside a barrel.
at 5:59 PM