Not the Four Horsemen... The Ten Plagues will bring Obama down. 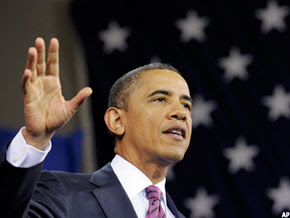 This last Saturday former Pennsylvania Senator Rick Santorum won decisively in the Kansas Caucus, garnering the lion’s share of the 40 delegates at stake while frontrunner Mitt Romney prevailed in Wyoming, taking 7 of 12 delegates in play with another 14 at-large delegates to be chosen later in April.
The Republican primary fight now moves to Alabama and Mississippi this Tuesday.  A Rasmussen poll of likely voters released this week shows Mitt Romney at 35% and Rick Santorum tied with Newt Gingrich at 27% in Mississippi.
In Alabama, polls shows Newt Gingrich ahead of Rick Santorum 30% to 29% with Romney in a close third at 28%.
At present, Romney holds a comfortable lead in the delegate count but the attack ads that afforded Mitt Romney his front-runner status has produced a troubling outlook for the days ahead.
And while the 2012 presidential election is still winnable for the GOP, this problem has been exacerbated by the former Massachusetts governor’s negative campaigning, which has transformed a lack of enthusiasm towards his candidacy into blatant hostility.
The subject of Mitt Romney’s campaign style became an issue on the Laura Ingraham Show this Thursday when the radio host interviewed the Weekly Standard’s Bill Kristol on Jackson, Mississippi’s WJNT 1180 am regarding the Keystone State native Rick Santorum’s efforts to compete with the GOP front runner.
“…It’s hard for Santorum to get to 1,144 [delegates] but it’s not impossible for Santorum to catch Romney and both of them to go into the convention 100, 150 short.” Kristol said.
“Santorum would have to do better than he’s done so far.  He would have to start outperforming Romney instead of being – you know – a close second to Romney in states like Michigan and Ohio.  But it wouldn’t be a wild stretch.  You know it’s a one in five, one in six chance, but it’s not a 1 in 100 chance.” Kristol concluded.
None of the four GOP contenders has emerged as a conquering hero yet.. But it won't take a hero to defeat President Obama. His record over the last four years will be reason enough to vote him out of office. His worst enemies are like the Ten Plagues of Egypt.
1. The economy is down. Since 2008 the U.S. economic clock has been turned back 10 years. If congressional gridlock continues The Economist reckons it will continue declining. The only country that slid more than the U.S. is Greece.
2. Gas is more and more expensive. Obama said, "There is no silver bullet" to temporary rising gas prices. Temporary? On Obama's watch gas has risen from an average of $1.85 a gallon to near $4 today. He does have a solution: Americans will drive cars that get 55 mpg. In the small print, there's a warning: These cars are small stripped down and will ruin the american auto business..
3. The war in Afghanistan is a fiasco. Obama's good war has turned into a mess. We are seeing a second Vietnam.

4. The youth are disillusioned. Mr. Hope-and-Change has let down his younger voter champions -- 66% voted for him in 2008. Youth unemployment is at a 60-year high. It is now over 18%. It was 14% in 2008 (10.5% in 2007).
5. Lending is still down. New bank loans remain at historic lows: Just 50% of GDP. Healthy growth calls for new loan growth of at least 100% of GDP. The 848-page Dodd Frank Act is a major contributor to bank hesitancy to lend.
6.Education is still abysmally low. The United States has fallen to "average" in international education rankings released by the Organisation for Economic Co-operation and Development, according to the AFP.America has received scores around 500 on a scale that goes up to 1,000: 487 in math, 500 in reading and 502 in science. PISA scores are on a scale, with 500 as the average. Two-thirds of students in participating countries score between 400 and 600. On the math test last year, students in Shanghai scored 600, in Singapore 562, in Germany 513, and in the United States 487.
7. Welfare rolls are rising. Americans have always taken pride in our work ethic and being self-sufficient. No welfare state here. At least there didn't used to be. Welfare spending in the U.S. is up 29% on Obama's watch. Food stamps recipients are up 68% from 28 million under Bush to 47 million under Obama.
8. So is the national debt. The nation's debt has grown a whopping 65% on Obama's watch. It's gone from $10 trillion to $15.5 trillion\
9. The U.S. lost its AAA rating. Under Obama, America has had its first credit downgrade. A huge contributory factor was his inability to lead Congress.
10. House prices have plummeted. Home prices hit their peak in 2006. In 2011 they hit new lows
The GOP nominee does not have to run against this President...his record will be his downfall.
at 10:58 AM