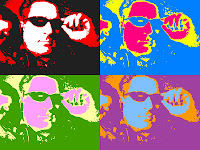 
"Straightforward American cuisine, with an emphasis on “Comfort Food Classics” done with a Chef’s perspective. We serve food that is fresh and carefully crafted, nothing reinvented, or overwrought, just well prepared, with excellent ingredients, and attention paid to the seasons. "


The service has always been excellent and the ownership are the hands on proprietorship tandem team of David Graham & Michael Kim Wolf, Proprietors
David and Michael have been friends for over a quarter of a century. They met, most appropriately, at a Sacramento restaurant where David worked as a server and Michael a busser. This is their first restaurant venture together, but certainly not the last.


David and Michael acquired 38 Central in the summer of 2008 because it was the ideal location to create their first restaurant together.
With its spectacular setting, skillfully executed “American Classics” menu, exciting wine and spirits list, gracious service, and extremely reasonable prices,38 Central is our version of the perfect neighborhood restaurant, a local gathering spot without pretense. So dress casually, bring friends and a healthy appetite.


The WineOur small, value-priced, but dynamic list focuses on Oregon, the greater Northwest, California and a few hidden gems from around the world: 30% is $30.00 or less, 67% is $40.00 or less, 35% is from Oregon, 85% is from the United States, and 15% is from the rest of the world. Many exciting new wines and hard to find selections (mostly from close friends here & in the Napa Valley)
The BarA Premium Well (as defined by the Zagat/Drinkwell program) and Cocktail List featuring updated ‘Classic Cocktails’ made with Premium Spirits and Specialty Drinks that are innovative and, like our menu, made with the finest ingredients and attention paid to the seasons.

David Graham & Michael Kim Wolf, ProprietorsDavid and Michael have been friends for over a quarter of a century. They met, most appropriately, at a Sacramento restaurant where David worked as a server and Michael a busser. This is their first restaurant venture together, but certainly not the last.

David Graham, Director of Operations
David Graham started his food service experience in Napa as a line cook at the local Sizzler Restaurant in 1976 at the age of 17. He quickly became the youngest applicant accepted in the Sizzler Chain for management training. David continued to work in restaurants through college, ultimately partnering in the largest catering company in Sacramento. From there David furthered his culinary talents becoming the Senior Regional Director for Sodexho-Marriott, overseeing, managing and creating foodservice contracts throughout the Bay Area. David holds many awards and accolades including graduation from the CIA Executive Chef Continuing Education Graduate School in New York, past president and founding member of the Marin branch of the AHA, and community awards from each region he works in. David currently lives in Medford, Oregon and runs a family business manufacturing and distributing patented home and sewing goods throughout the world.

Michael Kim Wolf, Managing Partner
Michael has worked in the restaurant business since he was 17 years old and has managed restaurants for over 16 years. He came to the Napa Valley in 1992 to work at Mustards Grill as a manager and wine buyer. His first tour-of-duty as General Manager was at Betelnut PeJiu Wu, the now famous Asian “beer house” in San Francisco and, in its first year, a nominee for ‘Best New Restaurant in the United States’ by the James Beard Society. After returning to Napa in 1996, Michael has been General Manager at Pinot Blanc, Miramonte Restaurant & Café, and, returning for a third time, Mustards Grill where he was also Managing Partner from 2000 to 2005. In 2006, Michael accepted the position of Director of Operations for MARKET “An American Restaurant” in beautiful downtown Saint Helena. However, after a few visits here to see his good friend David, Michael could not deny the excellent opportunities that existed in Medford and Jackson County or as Michael calls it “God’s back forty.”
38 CENTRAL WEBSITE http://38central.net/index.php