"The combination of these EWC recommended actions would eliminate the need to construct a Peripheral Canal or Tunnel under the Delta and the need for major new surface storage dams as contemplated by the Delta Plan and the upcoming water bond," according to the Environmental Water Caucus. "These two actions alone would save taxpayers at least $20 billion in new costs."

The EWC comments were issued at a critical time for the future of California fisheries and the Sacramento-San JoaquinRiver Delta. The Obama and Brown administrations are pushing for the construction of a peripheral canal or tunnel to export California Delta water to southern California and corporate agribusiness on the west side of the San Joaquin Valley. Delta advocates believe that the construction of the canal will lead to the extinction of Sacramento River chinook salmon, Central Valley steelhead, Delta smelt, longfin smelt, Sacramento splittail, green sturgeon, southern resident killer whales and other imperiled species. 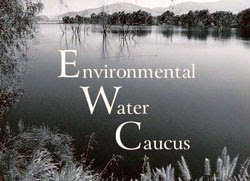 A Realistic Plan for the Delta

In late 2009, the legislature created the Delta Reform Act which established a suite of requirements and basic goals for the Sacramento-San Joaquin-San Francisco Bay Delta. These included a more reliable water supply for California, protecting, restoring and enhancing the Delta ecosystem, and developing a legally enforceable Delta Plan to achieve these goals. The newly created Delta Stewardship Council has now produced a Delta Plan and a 2,300 page Environmental Impact Report (EIR) that fails to achieve these basic goals.

The Environmental Water Caucus (EWC) and our many affiliated organizations has responded with written comments to that proposed EIR and told the Delta Stewardship Council that they need to reissue an Environmental Impact Report that meets the mandates of the state legislature. This revised EIR should be fact based and clearly establish the specific actions that will put the Bay Delta and its declining fish and wildlife on the road to recovery. In a nutshell, here’s what the EWC said:

• “Water supply reliability” does not mean increased exports from the Delta, and is shorthand for a policy to increase Delta water exports for the benefit of San Joaquin Valley farming corporations and Southern California developers.
• The proposed Delta Plan is patently inconsistent with the increased Delta outflows recommended by the State Water Board for the health of the Delta.
• The EIR abrogates the Delta Stewardship Council’s duty to carefully evaluate and protect public trust resources.
• The proposed Delta Plan fails to enforce existing water quality laws.
• The provisions of the secretly negotiated Monterey Amendments need to be analyzed for their impact on water supply for Southern California.
• There is a complete lack of quantifiable data to evaluate the alternatives discussed.
• It is inconceivable that such a major undertaking as the Delta Plan so far contains no information on the costs of the alternatives; yet a Proposed Project has been selected with no references to costs or benefits.
• The Environmental Water Caucus’ superior alternative should be more accurately reflected in the EIR and then selected as the Proposed Project.
• The Draft EIR should be significantly revised into a legally compliant and enforceable Delta Plan.

We do not believe that the proposed Delta Plan and EIR will result in the recovery of fish and other wildlife in the Delta; it will not stabilize and recover the Delta in a way that provides an ongoing and healthy environment for fish and other species; and it will not provide a sustainable foundation for a viable Delta community.

The Delta Stewardship Council needs to produce at least two additional components for this to be considered an adequate and legal EIR: 1. A water availability analysis to determine if sufficient water is even available for each of the analyzed alternatives, and;
2. A socio/economic analysis to provide the information fundamental to allocating a scarce resource and to balancing the public trust, as required by the State of California.

The EWC alternative, based on the EWC report California Water Solutions Now (http://www.ewccalifornia.org/home/index.php), which was presented to the Council and “evaluated” in the EIR, calls for the following specific actions:
• Reduced exports from the Delta
• Increased flows for the Delta and its connected Central Valley rivers
• An aggressive statewide water conservation and efficiency program to partially compensate for the reduced exports
• Increased reliance on regional water solutions
• Elimination of irrigation water for impaired lands in the San Joaquin Valley
• Maximum use of existing facilities and improved fish screens in the Delta
• Restoration of approximately 18,000 acres of Delta ecosystems
• Reinforcement of existing core levees to higher standards in order to reduce the impacts from projected sea level rise or potential earthquake risks
• Examination of Tulare Basin water storage
• Floodplain and river integration
• Fish passage for Central Valley rim dams
• Cold water for fish in those reservoirs
• User fees to fund agencies,

The combination of these EWC recommended actions would eliminate the need to construct a Peripheral Canal or Tunnel under the Delta and the need for major new surface storage dams as contemplated by the Delta Plan and the upcoming water bond.
These two actions alone would save taxpayers at least $20 billion in new costs.

That would be a more realistic and economically viable Delta Plan.