The letter criticized the agreement for offering the signatories, including water agencies from southern California, the San Joaquin Valley and Santa Clara Valley, "extraordinary opportunities to influence the process, to the disadvantage of Delta communities, environmental organizations, fishing groups and the public at large. 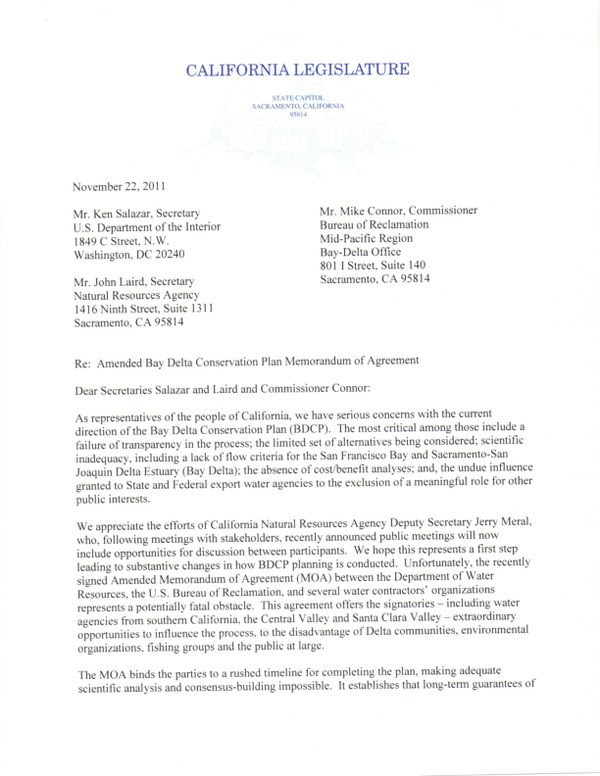 On November 22, Senator Lois Wolk (D-Davis) and 16 other Northern California state legislators asked the Department of the Interior and California Resources Agency to rescind the approval of the widely-criticized Bay Delta Conservation Plan (BDCP) Memorandum of Agreement (MOA) with a select group of water exporters.

The Obama and Brown administrations are continuing to fast-track the Bay Delta Conservation Plan to build a peripheral canal or tunnel to export more water to corporate agribusiness and southern California, in spite of tremendous risk to Central Valley salmon and Delta fish populations and Delta communities.

"As representatives of the people of California, we have serious concerns with the current direction of the Bay Delta Conservation Plan (BDCP)," the California legislators wrote. "The most critical among those include a failure of transparency in the process; the limited set of alternatives being considered; scientific inadequacy, including a lack of flow criteria for the San Francisco Bay and Sacramento-San Joaquin Delta Estuary (Bay Delta); the absence of cost/benefit analyses; and, the undue influence granted to State and Federal export water agencies to the exclusion of a meaningful role for other public interests."

The letter criticized the agreement for offering the signatories, including water agencies from southern California, the San Joaquin Valley and Santa Clara Valley, "extraordinary opportunities to influence the process, to the disadvantage of Delta communities, environmental organizations, fishing groups and the public at large."

"The MOA binds the parties to a rushed timeline for completing the plan, making adequate scientific analysis and consensus-building impossible. It establishes that long-term guarantees of 'certainty' to Central Valley Project export water contractors will be a first priority for state and federal decision makers. And, it memorializes the 'pay to play' nature of the BDCP, as many of our Washington legislators have phrased it, by giving the export water agencies an unprecedented level of control over what should be an open, public process," the letter continued.

The legislators cited the recent letter by Representatives George Miller, Doris Matsui, Jerry McNerney, Mike Thompson and John Garamendi to U.S. Interior Secretary Kenneth Salazar that urged him to retract Interior's approval of the MOA and allow a public comment period of 45 days on the agreement prior to final approval.

"We urge the same, and for the State, in parallel, to retract the Department of Water Resources' approval of the MOA immediately," Wolk and the other legislators wrote.

The opposition to the BDCP MOA, a plan to export more water disguised as a habitat conservation plan, is mushrooming. Members of Congress and California legislators are opposed to it. A massive coalition of 242 environmental groups, Indian Tribes, fishing organizations, environmental justice groups and consumer advocacy organizations is opposed to it.

Yet the Obama and Brown administrations appear committed to a peripheral canal plan that is likely to result in the extinction of Central Valley steelhead, Sacramento River chinook salmon, Delta smelt, longfin smelt, green sturgeon and Sacramento splittail.

These are the same administrations that have eclipsed even the Bush and Schwarzenegger administrations in slaughtering Delta fish and Central Valley salmon in the state and federal water project facilities in the South Delta. The Obama and Brown administrations killed record numbers of Sacramento splittail and other fish in the pumps while exporting record amounts of water out of the Delta this year.

Over 11 million fish, including 9 million Sacramento splittail, have been "salvaged" at the Delta pumps near Tracy in 2011. The previous record salvage number for the splittail, a native minnow found only in the Sacramento-San Joaquin River system, was 5.5 million in 2006.

The other 2 million fish "salvaged" at the pumps include striped bass, largemouth bass, Sacramento River spring chinook salmon, Central Valley steelhead and other species. Yet the numbers salvaged are just a fraction of the actual loss of fish in the pumps; scientific studies point to the real loss being 5 to 10 times the "salvage" numbers. (http://blogs.alternet.org/danbacher/2011/09/09/over-11-million-fish-salvaged-in-delta-death-pumps-since-january-1).

The state and federal water projects pumped a record 6.5 million acre-feet of water from the Delta in 2011, according to government data compiled by Spreck Rosecrans at Environmental Defense. The previous record was 6.3 million acre-feet in 2005.

If Ken Salazar and John Laird have no problem killing record numbers of fish and exporting record amounts of water, is it any surprise that they are fast-tracking the plan to destroy the Delta by building the peripheral canal?
at 5:12 PM