This letter features probably the most extensive, diverse list of organizations ever mobilized in defense of our fish populations and waterways in California history. 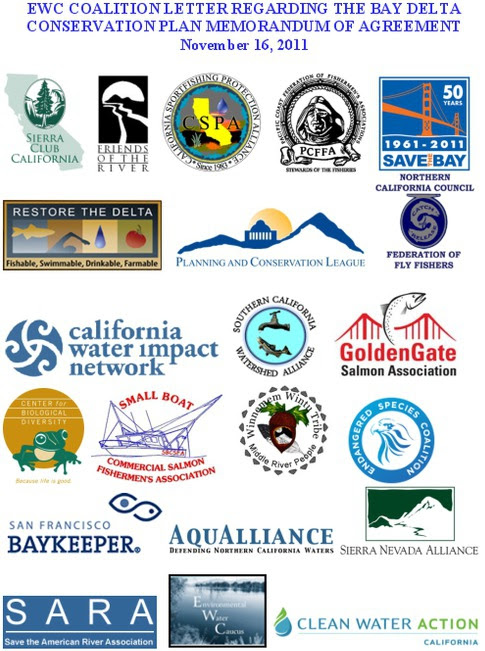 The state-federal BDCP aims to build a peripheral canal or tunnel to export more water from the Sacramento-San Joaquin River Delta to corporate agribusiness and Southern California. Delta advocates believe it would lead to the extinction of Central Valley steelhead, Sacramento River chinook salmon, Delta smelt, longfin smelt, green sturgeon, Sacramento splittail and other imperiled species ravaged by record water exports from 2003 to 2006 and in 2011.

The list of logos of organizations, tribes and businesses signing the letter alone is six pages long. This letter features probably the most extensive, diverse list of organizations ever mobilized in defense of our fish populations and waterways in California history.

The groups wrote, "The MOA was negotiated behind closed doors and only serves to reinforce the growing awareness that the BDCP is biased in favor of the export water contractor’s agenda to increase exports from the Delta and its connected rivers, despite the documented negative impacts those exports have had on endangered fish species, Delta habitats, water quality and public trust values. Our concerns are similar to the October 24 letter you received from Congressmen Miller, Thompson, Matsui, McNerney, and Garamendi on the same subject." (http://www.c-win.org/content/dan-bacher-california-representatives-slam-closed-door-bay-delta-process.html)

"We understand that MOAs are a regular aspect of the HCP and NCCP process. Nevertheless, this MOA makes unacceptable concessions to the exporters’ substantive agenda to influence the analytic process, extends no surprises guarantees to contractors in clear conflict with current law, and elevates the contractors to the status of permit holders for public works projects owned and operated by state and federal agencies," the letter continued.

"We are deeply disappointed that the Obama and Brown Administrations have acquiesced to the export contractors’ efforts to twist what should have been a straightforward financing agreement for planning into a negotiation vehicle to successfully secure unprecedented influence over the HCP/NCCP process," the letter states.

The letter concludes, "We request that you rescind this biased and unjustified MOA and prepare a new agreement that fairly includes the interests of all parties, including NGO’s, Delta residents, farming and business organizations, environmental justice groups, recreational and commercial fishing organizations, and Native American Tribes. In the absence of such a fundamental rewrite, the undersigned organizations have little alternative but to oppose continuance of the BDCP process.

Bill Jennings from the California Sportfishing Protection Alliance, Tom Stokely of the California Water Impact Network, Dick Pool from Water for Fish and the Golden Gate Salmon Association, Mark Rockwell of the Endangered Species Coalition, and Nick Di Croce and David Nesmith from the Environmental Water Caucus were instrumental in obtaining the 242 signatories to the letter. Credit must go to Bill Jennings for masterminding the sign-ons for this amazing achievement.

In addition to the unified group letter, organizations also sent letters of their own to oppose the state-federal plan to build the canal. For example, Dick Pool, President of Water for Fish, sent a strongly-worded letter to Salazar and Laird.

"This agreement corrupts the entire Bay Delta Conservation Plan and assures that there will only be one result of that plan - the export of additional water to the agricultural and Southern California interests at the expense of the water needs of the salmon, the Delta environment and every other water user in California," wrote Pool.

"You are destroying any pretense of an open and transparent process that includes the interests of all the concerned parties including the salmon fishing industry. By doing this, it is our belief you are setting the stage for the extinction of the Central Valley salmon. By their past actions, it is very clear that the water exporters are unwilling to give up the water that salmon need to survive. You are giving them the power to destroy the salmon and 23,000 jobs in the industry," Pool concluded.
at 9:04 AM