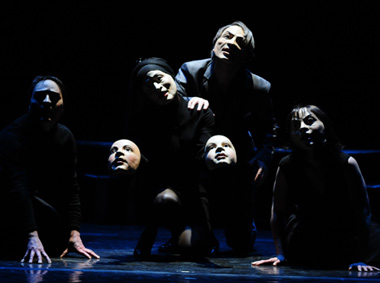 
Six Characters in Search of an Author

by Pericles Lewis
When the lights come up on Luigi Pirandello’s Six Characters in Search of an Author (1921), the first thing the audience sees is a bare stage, with no scenery and only a few folding tables and chairs scattered about. A stage-hand is starting to build a set, but the stage manager interrupts him to say that it is time for rehearsal. The producer and a company of actors arrive and begin reading out stage directions; the actors complain about the script, but the producer (who also serves as director) explains that he “can’t get hold of good French plays any more so that now we’re reduced to putting on plays by Pirandello.” Before the rehearsal can get underway, an attendant comes up the central aisle of the auditorium and announces unexpected visitors. Six characters, wearing masks, and identified only as Father, Mother, Stepdaughter, Son, Boy, and Girl, follow the attendant up the aisle and beg the producer to find them an author who can write a play about them, or to include them in the play he is about to produce.

After some bewilderment, the characters explain that the author who invented them did not complete their play. They tell the rather melodramatic story of their lives. The producer agrees to create a play about them. The professional actors (who are not wearing masks) start playing the roles of the characters, but when they arrive at a crucial scene, the characters intervene, complaining that they are not being fairly represented. The producer thinks that the play will succeed, but decides to change a few details. The company’s leading actress explains that audiences today are not as good as they once were at accepting theatrical illusion. At this word, the characters object again:


FATHER (jumping up suddenly): Illusion? I would ask you not to speak of illusion! I would beg you not to use that word. For us it has a particularly cruel ring!
PRODUCER (astonished): For heaven’s sake, why?
FATHER: Oh, yes, cruel, cruel! You really ought to understand.
PRODUCER: What are we supposed to say? Illusion is our stock-in-trade [...]
FATHER: I entirely understand [...] As artists [...], you have to create a perfect illusion of reality.
PRODUCER: That’s right.
FATHER: But what if you stop to consider that we, the six of us (he gestures briefly to indicate the six characters) have no other reality; that we don’t exist outside this illusion!

In this scene, Pirandello plays with the traditional goal of the theater—“to create a perfect illusion of reality”—and asks the audience to consider the different levels of reality present in a stage production: the theater as a physical space, including sets constructed by a crew; the written text of the play; the actors’ performance; and the represented reality of the characters’ lives, which of course is usually fictional. In Six Characters, however, the fictional characters come to life and insist on their own rights, seeking to dismantle the illusion of reality in favor of reality itself, or rather in favor of illusion itself, which is their only reality.

Pirandello’s work plays with the central tension in the modern theater between the desire to create a perfect illusion of extra-theatrical reality on the stage and the contrary impulse to celebrate the very illusoriness of all theater. Modern drama calls attention to the fact that theater is both a representational art, like painting or writing, and a performing art, like dance or music.[1] The actors on stage are at the same time real people and representatives of fictional characters. One of the startling elements of Pirandello’s play is the separation (which he emphasized in his stage directions) between the “characters” and the “actors.” As the theorist Bert States has written,


"we tend generally to undervalue the elementary fact that theater—unlike fiction, painting, sculpture and film—is really a language whose words consist to an unusual degree of things that are what they seem to be…. Or, as [the playwright] Peter Handke puts it, in the theater light is brightness pretending to be other brightness, a chair is a chair pretending to be another chair,”

and, of course, a person is a person pretending to be another person.[2]

Like the “high modernist” works The Waste Land and Ulysses, Six Characters seems to take the avant-garde concerns of the futurists, dadaists, and surrealists to a higher level of seriousness and thus to transform a series of minor experiments into a tradition. The avant-garde playwrights celebrated theatricality, while Bertolt Brecht, though influenced by the avant-garde, promoted an anti-theatrical theater. Pirandello’s work has been described as “metatheater.” In metatheater, the characters are “aware of their own theatricality,” in the phrase of Lionel Abel.[3] Abel finds the roots of metatheater going all the way back to Shakespeare (as in the play within a play in Hamlet); modern metatheater begins with the futurists and dadaists and reaches the mainstream with Pirandello; the metatheatrical impulse plays a particularly important role in the works of later playwrights such as Samuel Beckett. Like Anton Chekhov, Pirandello came to the theater after having already established himself as a writer of short stories and novels. His prose fiction deals with themes related to the illusory character of personal identity, and it formed the basis of some of his early plays. There were few immediate theatrical antecedents for the meditation on theatricality contained in Six Characters and in his other major plays, Right You Are (If You Think You Are) (1917) and Henry IV (1922). These other two plays, like his novel One, No One, and a Hundred Thousand (1926), address the question of madness and the difficulty of telling who is mad in a world that itself seems to have gone insane. Six Characters stands out from Pirandello’s other work because in it he abandons the theme of madness; the problem of the theatricality of experience is a problem about the nature of theater and life itself, rather than one of mental disturbance.

The split between the “Actors” and the “Characters” in Six Characters seems at first to represent a division between “reality” and “illusion.” Yet, the “real” actors are specialists in achieving illusion, and the characters claim with some justification to be more “real” than reality. Like the modernists who celebrated the power of myth to transform the everyday, Pirandello celebrates the theater, which reveals the element of self-dramatization inherent in the roles people play in everyday life. Although their story contains a heavy dose of melodrama and therefore seems “unrealistic,” Pirandello does not simply treat the Characters with irony. Rather, he seems to celebrate the greater intensity of their dramatic self-representation as the basic impulse behind art. In the climactic incident of Six Characters, when Pirandello introduces that favorite device of the "well-made play," the gunshot, the melodrama of the Characters’ imaginary lives certainly seems more real and more intense than anything envisioned by the “real” Actors. Thus the various levels of reality in the theater are crossed and the most theatrical of effects is celebrated for its closeness to reality. Although in some respects a unique occurrence, not immediately imitated or taken up by a movement, Pirandello’s metatheater would eventually have a great impact on modern drama. Six Characters was greeted with some hostility when first produced in Italy in 1921, but it was hailed as a major work of modern theater at its debut in Paris in 1923. It entered into the French dramatic tradition that would, after the second world war, result in Beckett’s theater of the absurd.[4]

The Father - Originally married to The Mother and insisted on The Son being sent off to live in the country. Afterwards, he hired another man who worked as a clerk for him to take The Mother away. Later, he may or may not have an affair with The Stepdaughter, until The Mother interferes. When he learns that The Mother's lover died, he brings her, The Son, The Stepdaughter, The Child, and The Boy back to live with him.
The Mother - Originally married to The Father, she is taken away by a man her husband employs. She has three children, The Boy, The Child, and The Stepdaughter with the second man and has The Son with The Father. It is mentioned that her real name is Amalia.
The Son - The son of The Father and The Mother. To make him stronger, the father has him sent off to the country to live with a wet nurse when he is a baby. Therefore, he grew up not knowing his parents and dislikes them. He also dislikes his stepfamily, not considering them a part of the family.
The Stepdaughter - The spirited daughter of The Mother and her second husband. She is employed by Madame Pace (implied to be as a prostitute) and after she is "two months an orphan", she has an incestuous relationship with The Father. It is stated that she runs away from home later in the story. According to her, she went to the author of the story constantly, trying to get him to finish the tale.
The Boy - The middle child and only son of The Mother and her second husband. He is disliked by The Stepdaughter, who thinks he is an idiot. He never speaks during the play. At the end of the play, he commits suicide by shooting himself with a revolver.
The Child - The youngest daughter of The Mother and her second husband. She is the favorite of The Stepdaughter. It is mentioned once that her name is Rosetta. She never speaks during the play. At the end of the play, she drowns in a fountain she was playing in, although The Son tries to pull her out.
Madame Pace - Employer of The Mother and (later) The Step-Daughter. She runs a brothel out of her store. She only appears for a short period of time in the play, when The Stepdaughter and The Father perform their scene in the shop together. She speaks in a comical jargon "half Italian, half Spanish".
The Company:
The Manager, Leading Lady, Leading Man, Second Lady, The Ingenue, Juvenile Lead, Other Actors and Actresses, Property Man, Prompter, Machinist, Manager's Secretary, Door-keeper, Scene-Shifters.