Aerial photo of the Tracy Fish Collection Facility (TFCF) in the South Delta courtesy of the Bureau of Reclamation. 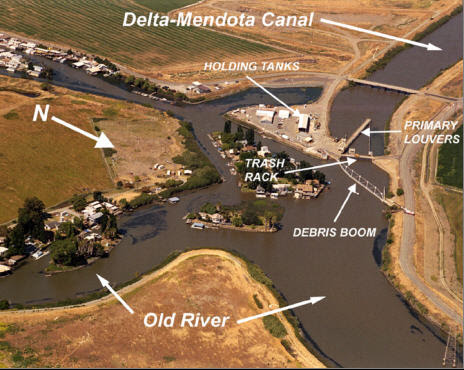 The number of splittail "salvaged" to date is greater than in any previous years since the federal and state governments started keeping records on splittail in 1993. The splittail is a member of the minnow family found only in the Central Valley and Delta,

"And these 'salvage' numbers represent only the tip of the iceberg," Jennings emphasized.

The overall loss of fish in and around the State Water Project and Central Valley Project facilities is believed to dwarf the actual salvage counts, according to "A Review of Delta Fish Population Losses from Pumping Operations in the Sacramento-San Joaquin River Delta," prepared by Larry Walker Associates in January 2010 for the Sacramento Regional County Sanitation District (http://www.srcsd.com/pdf/dd/fishlosses.pdf).

Of the remaining fish actually salvaged, 1-12% are lost during handling and trucking operation and another 10-30% are lost to post-release predation because there are only 4 release sites, according to the report.

The numbers are far worse for Delta smelt, as 94-99% are lost to predation in project facilities and virtually no salvaged delta smelt survive trucking and handling.

“The massacre at the pumps pushes already-struggling salmon and native fish populations closer to extinction and is entirely unnecessary,” said Jeff Miller, conservation advocate for the Center for Biological Diversity. “This is a high rainfall year, and there was no need for continued pumping at this level while so many fish were being killed. Excessive pumping and the highest-ever water diversions from the Delta the past decade have crippled Central Valley fish runs, including commercially valuable chinook salmon.”

Splittail were formerly protected as a threatened species but illegally stripped of Endangered Species Act (ESA) protection in 2003. "The U.S. Fish and Wildlife Service last fall made a controversial determination that the species does not warrant protection, despite the fact that numbers of splittail found in annual California Fish and Game surveys have fallen to consistently low levels since 2002, and that the estimated population from 2002 to 2010 has been the lowest recorded since surveys began in 1967," stated Miller.

The Obama administration, in denying the splittail ESA protection in October 2010, claimed that the capture of huge numbers of fish by the pumping facilities in wet years has little impact on splittail abundance.

“Research has shown no evidence that south Delta water export operations have had a significant effect on splittail abundance, even though fish collection facilities can capture a large number of fish (up to 5.5 million) during wet years, when spawning on the San Joaquin River and other floodplains results in a spike in population numbers,” the U.S. Fish and Wildlife Service contended in a press release in October 2010. “The number of splittail captured by these facilities drops during dry years when recruitment is low (1,300 in 2007; about 5,000 in 2008) and the splittail is most vulnerable.”

The carnage at the pumps continues as Republicans in Congress push legislation, HR 1837, to exempt export pumping in the Delta from Endangered Species Act protections for salmon, Delta smelt and other species and to block restoration efforts on the San Joaquin River. Representative Devin Nunes (R-CA), the darling of San Joaquin Valley corporate agribusiness interests, has authored the job-killing legislation that will devastate imperiled California fish populations and fishing communities.

Rather than taking long-needed action to stop the carnage at the water export facilities, the Brown and Obama administrations, in the foot steps of the Schwarzenegger administration, are instead pushing for the construction of a peripheral canal or tunnel through the Bay Delta Conservation Plan (BDCP) to facilitate the export of more northern California to corporate agribusiness on the west side of the San Joaquin Valley and southern California water agencies.

A broad coalition of recreational anglers, commercial fishermen, family farmers, Indian Tribes, grassroots environmentalists and Delta residents is opposing the construction of the peripheral canal because it is likely to lead to the extinction of Central Valley steelhead, Sacramento River chinook salmon, Delta smelt, longfin smelt and other imperiled fish species. Many also oppose the BDCP because it puts the burden on the primary zone of the Delta and Sacramento River watershed for habitat restoration and mitigation for the massive diversion of northern California water by San Joaquin Valley agribusiness and Southern California.

For more information, go to: http://www.calsport.org.
Add Your Comments
at 12:04 PM