Yellow journalism or the yellow press is a type of journalism that presents little or no legitimate well-researched news and instead uses eye-catching headlines to sell more newspapers. Techniques may include exaggerations  news events, scandal-mongering, or sensationalism. 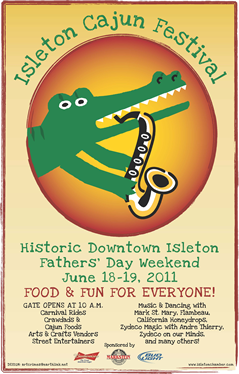 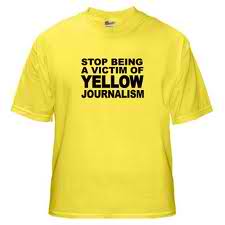 The Isleton Cajun Festival took it it on the chin when they closed the festival in 2009. Now in resurgence from it's forced closure because of finances and bad management by officials no longer involved, they are taking it on the chin again by misleading media reports. Receiving  frantic calls from vendors and participants because news reports from a Contra Costa Newspaper reported the Festival might not be "legal." has caused concern.  The San Jose Mercury News reprinted the story as did others in that media group.  The story claims that the Isleton chamber of commerce lost it's right to operate and cannot sponsor any events, according to the state tax board. But he did not actually quote the spokesman verbatim.


The writer seemed to have interjected his interpretation, assuming the tax board has the authority to give or take citizens rights to operate in any capacity. They may have the right to regulate taxes concerning revenues, but  I find the story which many media outlets have reported from to be vague and  not very responible journalism in their fact checking.


They quoted the Franchise Tax Board spokesman saying; "We are always actively searching for assets to seize. It could be an action for us to take," California Franchise Tax Board spokesman John Barrett said.
The writer also reported: The tax board revoked the Isleton chamber's authority after the group's previous leaders, headed by real estate agent Charli Hand, failed to file paperwork with the Secretary of State's Office and also failed to file its 2007, 2008 and 2009 income tax returns, Barrett said.


The writer did not make it clear they were referring to the defunct chamber. They (tax board) can only authorize or not, the collecting of state taxes, but not operating as a chamber of Commerce does, promoting business. That's none of their business. They suspended the previous chamber's status and by their own policy the new chamber is legal, from their ( Franchise TB) Website:   " Suspension or forfeiture affects a business in many ways: The business loses the right to use it's business name in California. In turn, another business could register with the suspended or forfeited business' name, and the name would then belong to the other business."


The new chamber did just that, and created new bylaws and is operating as a legal entity, and even payed delinquent fees they were probably not legally liable for.


What is their (tax board) concern over a new and unrelated association that is compliant and were not complicit in past reasons for suspension? Money? When the Franchise Tax Board say's we cannot form associations because others in the past owe them money and did not file tax forms and threatens to seize assets, something is very wrong, and it smacks of extortion!


Go after those persons who were responsible... not innocent members of the community who have the Constitutional right to associate. Let me remind them of Civics 101:

Seems to me they need to follow the money, it went north with the 'rights and name.' They now have even taken the new name; The Great Isleton Cajun Crawdad Feed Festival - Red Bluff, California  Something stinks in Denmark!


The story begins by asking a question about the Festival... "is it legal? This immediately casts a shadow on Isleton's efforts to get back in the saddle and bring business back to a hard hit community who are an example of American exceptionalism,  perseverance and true grit. When the question should be... what can we do to help our neighbors?


The city of Isleton can organize, recognize, charter or contract with whatever entities they are allowed to by their own charter, and voter approval. The State Franchise Tax Board... taxes! And as quoted in the dubious reporting of  these media outlets, they crow... "We are always actively searching for assets to seize. It could be an action for us to take," when they can they seize assets"  If this spokesman was not quoted out of context and or completely wrong, (I would have taped an interview)  he needs to be reprimanded.


While the city who legitimized  the previous chamber has perhaps limited liability, however the tax board will be hard pressed to find assets they can convert to cash. So of course the tax man looks for an angle to claim rights to the cash raised by the new chamber. The problem is there are new businesses and persons  that are not liable who are members of the new association.


Only the defunct chamber are liable and the individual (s) who transgressed, after due process. What When Where and Why was due process concerning even any wrong doing by former members? Why is the connection of the Hand's and the "short sale" of the festival to their current employers not investigated?


We are in a sad state of affairs when not only has California been anti-business via bureaucratic ineptitude  and over-regulated practices, but we have officials making threats that sound like they relish having dictator type authority. At least they think they do, that is if he (Barrett) was quoted right since the one quote was the only claimed quote allegedly made by a state official, he (Barrett) too could cry "plausible deniability" and point to poor reporting. He would have a good defense.


So far I am encouraged by the fact that the major media in Sacramento have not followed suit with the San Jose Mercury News and surrogates in that media group. Sensationalizing in this manner in these economic hard times is not appropriate for credible news companies nor is it good citizenship to kick an entire community when it has been down, and is courageous enough to get back up.


But we live in an era where trashy reality TV, and people's dirty laundry are the stuff couch potato's dreams are made of. Print media is down 70% across the board and only outstanding fair and balanced dailies will survive. While those news stories omitted facts and misrepresented others, unlike broadcast media, we have their misdeeds in black & white.


...."one of the worst things about civilization is, that anybody that gits a letter with trouble in it comes and tells you all about it and makes you feel bad, and the newspapers fetches you the troubles of everybody all over the world, and keeps you downhearted and dismal most all the time, and it's such a heavy load for a person.

- Tom Sawyer Abroad
There is no suffering comparable with that which a private person feels when he is for the first time pilloried in print.
- Life on the Mississippi... Mark twain


Sacramento Mayor Kevin Johnson has been asking the region to get on board with helping Sacramento keep the Kings and build a new arena/entertainment complex. Let's help a city in Sacramento county back on their feet, and I am sure we can use these kind of hard working citizens as examples for all of us, and see our region make a similar comeback!
at 3:06 AM