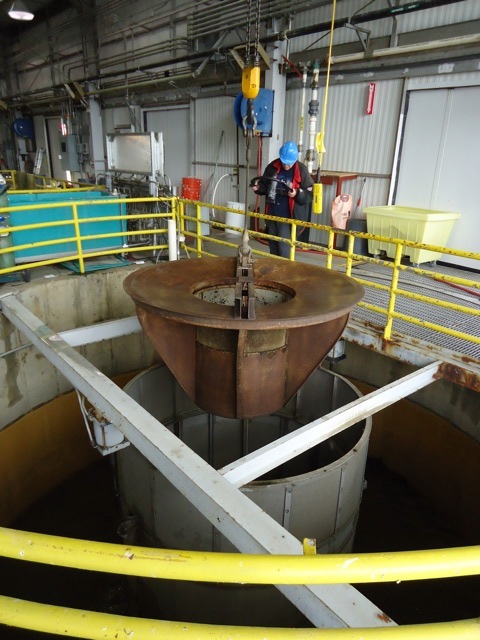 by Dan Bacher
The counts of Sacramento splittail and Central Valley chinook salmon “salvaged” in the state and federal pumping facilities on the Sacramento-San Joaquin River Delta continue to rise.
The latest data from the Bureau of Reclamation reported 8,538,859 splittail, a native minnow, and 35,202 salmon “salvaged” from January 1, 2011 to June 26, 2011.
The number of splittail salvaged to date is greater than in any previous years since the federal and state governments started keeping records on splittail in 1993. Splittail numbers historically have boomed in wet years when good spawning conditions are available in flooded areas of the Yolo Bypass and elsewere in the Delta and Central Valley.
The second biggest year for splittail salvage was in 2006, with 5,421,470 fish reported to date. The third biggest year as in 1995, with 5,333,673 fish reported by June 26.
“The carnage continues,” summed up Bill Jennings, chairman/executive director of the California Sportfishing Protection Alliance, after reviewing the latest data.
Also reported during the same time period were 66,198 striped bass, 59,614 bluegill, 45,942 white catfish, 17,390 channel catfish, 43,502 threadfin shad, 62,603 American shad, 1,632 steelhead, 4 longfin smelt and 51 Delta smelt.
It is important to note that the overall loss of fish in and around the state and federal pumping facilities is believed to be anywhere from 3 to 30 times the “salvage” counts, depending upon species, according to “A Review of Delta Fish Population Losses from Pumping Operations in the Sacramento-San Joaquin River Delta,” prepared by Larry Walker Associates in January 2010 for the Sacramento Regional County Sanitation District (http://www.srcsd.com/pdf/dd/fishlosses.pdf).
The Walker Associates study cited a 1996 report by DWR and DFG concluding that for every salmon salvaged at the fish protection facilities, more than three are lost to predators or are lost through the fish screens. The report also stated that these loss rates “demonstrate a serious problem.”
“The same 1996 report stated that over a 15-year period (1979 to 1993), 110 million fish were reported to have been salvaged at Skinner Fish Facility, the fish protection facility at the SWP,” the report stated. “These salvage statistics greatly understate the total number of fish entrained, since they do not include the number of fish lost to predators or lost through the fish screens. In fact, recent estimates indicate that 5-10 times more fish are lost than are salvaged, largely due to the high predation losses in and around water project facilities.”
In 2008, Wim Kimmerer, a prominent ecologist and Delta researcher, estimated that approximately 30 times more delta smelt are entrained than are salvaged.
“In 2008, the United States Fish and Wildlife Service (USFWS) also reported that high entrainment rates during winter months are suspected as a contributing cause of the early 1980s delta smelt decline and the pelagic organism decline or ‘POD,” the report noted.
In 2005, federal and state biologists began documenting a dramatic decline in four pelagic (open) water species – Delta smelt, longfin smelt, threadfin shad and young striped bass. The scientists pinpointed three major factors behind the decline – changes and increases in water exports, toxic chemicals and invasive species. More recently, scientists have claimed that ammonia discharges from sewage treatment plants also play a role in the decline of the pelagic fish species.
As the pelagic species have collapsed, so have Sacramento River chinook salmon. Central Valley fall-run salmon collapsed to record low population levels in 2008 and 2009, prompting the closure of ocean recreational and commercial fishing seasons. While higher numbers of fall chinook are projected this year by federal scientists, the winter and spring-run chinook populations continue to decline.
at 10:20 PM