Decriminalizing Drugs in America?
Should the U.S. decriminalize drugs? Can this be done without promoting more drug use is one of the questions that must be answered to even consider attempting such a radical option.
With marijuana being decriminalized and legalized in many states, the data so far collected on Colorado’s being one of the first to legalize it, shows millions of tax dollars  going to the state and many argue, taking away much crime connected with it’s former purveyor; the Black Market. While it can be argued still, that marijuana is a gateway drug, it is still illegal for minors for whom that concern is based upon.
Heroin, is a very destructive drug along with Methamphetamine. Both drugs are in epidemic usage as well as cocaine, to the point where black market criminal activities in certain demographics are responsible for murder, robberies and theft that are also in epidemic proportions. For many reasons, The War On Drugs, is failing in this country and the costs in lives lost and destroyed, are unacceptable. The financial burden has created tens of billions of taxpayer’s money in criminal justice and rehabilitation costs that are also unacceptable.


While the idea of decriminalizing drugs to fight addiction to them seems radical,  if it reduces crime and improves our penal system while cutting costs, and if it would work, would that not be common ground we could all work with?

Many believe we should decriminalize all drugs as the country of Portugal has done for over fourteen years now.  On July 1, 2001, a national law in Portugal took effect that decriminalized all drugs, including cocaine and heroin.
Under the new guidelines, all drugs were decriminalized, rather than legalized. We would not be legalizing them, only decriminalizing them.

Drug possession for personal use and drug usage itself are still legally prohibited, but violations of those prohibitions are now administrative violations and are separated completely from their criminal justice system. However, drug trafficking continues to be prosecuted.
While it must be exhaustively researched and planned efficiently, and not just creating another bureaucratic White Elephant Department, the Portuguese model  may be the way to go for America.  The World Health Organization (WHO) recommends in support of the decriminalization of personal drug use in a report released in 2014. The 159-page report, which focused primarily on HIV prevention and care worldwide, included a brief section discussing "good practice recommendations concerning decriminalization." WHO offered the following recommendations: “Countries should work toward developing policies and laws that decriminalize injection and other use of drugs and, thereby, reduce incarceration.” (p.90-93)

Also, “Countries should work toward developing policies and laws that decriminalize the use of clean needles and syringes (and that permit NSPs [needle and syringe programs]) and that legalize OST [opioid substitution therapy] for people who are opioid-dependent. Countries should ban compulsory treatment for people who use and/or inject drugs.” (p.88-90)
New therapies are being developed that are evidence based in neuropathic discoveries showing that addictive behavior has created neuro-pathways in the brain, that can be re-routed with positive actions and repetitive good behaviors abandoning the destructive pathways. Further studies have shown that getting rid of fatty tissue where drugs store themselves is very important to fight a later release of those drugs that trigger relapse desires. Treatment of drugs and alcohol has not always been evidence based. Medical treatments like ECT (electro convulsive therapy) was thought to be a good treatment where depression was diagnosed as a reason one was self-medicating. However, it was also found that many were depressed because of their addiction, it’s debilitating effect on their ability to work and interact in relationships that ECT only numbed depressive feelings because it killed millions of brain cells. Then the person experienced memory loss issues on top of the other co-morbid conditions of addiction. Intensive group therapy while in residency programs coupled with daily meetings as outpatients have been pretty much the standard approaches taken in the last 20 or 30 years.
The American model of treatment by clients who voluntarily enter treatment has not been successful as it should be.
One of the reasons is that there is no mandatory regulations for follow up after one enters a treatment program that has a residential cap of 29 days that is the most any insurance companies will pay for. Detoxification alone needs at least 30 days. When ordered by the courts into a treatment facility, as a diversion from criminal charges, no out patient treatment is usually accompanied by most court orders.                                                                                                                                                     Portugal however, does make treatment compulsory which is prudent. And treatment is working.  Glenn Greenwald, a constitutional lawyer and author reports concerning the Portugal project; “The number of people in substitution treatment leapt from 6,040 in 1999 to 14,877 in 2003, an increase of 147% . . . . The number of places in detoxification, therapeutic communities and halfway houses has also increased. . . . The national strategy has led directly to increases in the scale of treatment and prevention activities in Portugal.”  (Greenwald, Glenn p.47) Some worry concerning the marijuana issue, decriminalization will cause many health risks to be ignored.  Brain-studies show chronic marijuana users brain as abnormal, yet none of the side effect and dangers are being required to be advertised along with the promotion of its alternative virtues. However, with users in treatment, many health issues from their use can be short-stopped.
One of many studies shows the better arguments against marijuana to treat medical disorders, is that marijuana may cause the spread or aggravation of the disorders treated.
Smoking a joint a day can damage the cells in the bronchial passages which protect the body against microorganisms and decrease the ability of the immune cells in the lungs to fight off acteria, fungi, and cancer cells.


For patients with already weakened immune systems, this means an increase in dangerous pulmonary infections, including pneumonia, which is often fatal in AIDS patients. So these concerns need to be addressed as well as health issues for all drug decriminalization.
A well known quote used in recovery circles, although misattributed, is the definition of insanity: “doing the same thing over and over again and expecting different results.” While many will object to decriminalizing all drugs because of how we will be viewed internationally, what other action is there available to at least seriously consider a pilot program here? 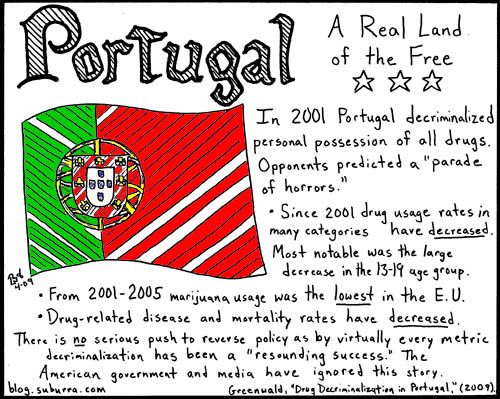 In conclusion, legalizing drugs and their sale is not the proposal here. Continued criminal prosecution for sales and smuggling is still advocated. Taking a piece out of the demand by decriminalizing drug use to rehabilitate users has yet to be tried here. Portugal has good model program to start with. Our war on drugs will keep failing if we keep fighting it with failed strategies.  We do have Drug Court programs that are a microcosm of decriminalization that are proving successful in the U.S. They reduce crime 45% and mirror much of the statistics Portugal’s success story. However, according to the  National Association of Drug Court Professionals, (NADCP) they only serve a “fraction of the 1.2 addicted in U.S.”  (web)