BB King's death to be investigated as murder 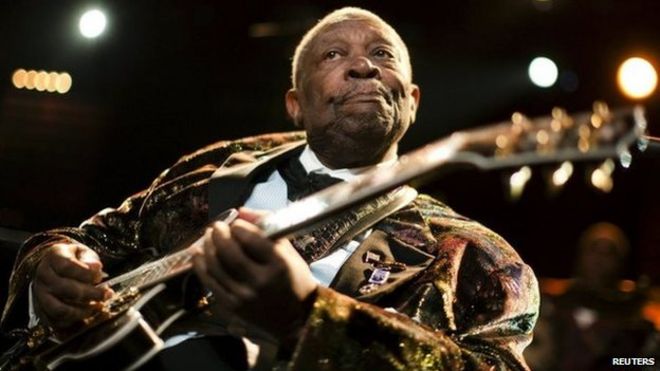 A murder investigation has been launched into the death of blues legend BB King after two of his daughters claimed he was poisoned.
Karen Williams and Patty King said the musician was given "foreign substances to induce his premature death" by his business manager Laverne Toney.
Lawyers for King's estate said the claims are unfounded and disrespectful.
But the possibility of homicide will now be investigated by the coroner and police in Nevada.
"Our coroner takes jurisdiction over B.B. King's body, performs autopsy," the Clark County Coroner's office wrote on Twitter on Monday.
Coroner John Fudenberg told CNN that the initial autopsy results found "no evidence to substantiate the allegations" made by King's daughters.
However, he added that full forensic results would take six to eight weeks to arrive.

King died in his sleep at his Las Vegas home on 14 May, aged 89.
At the time, his doctor and the coroner said he had died of a series of small strokes connected to his Type 2 diabetes.
But the guitarist's daughters alleged that King's personal assistant Myron Johnson and Toney gave him medication to induce diabetic shock.


The women added that "King was sequestered from all family members" in the week before his death, and that Toney and Johnson were the only people with him.
Toney, who is the executor of King's estate, shrugged off the daughters' claims.
"They've been making allegations all along. What's new?" she told the Associated Press.
A lawyer for King's estate also dismissed the accusations as "ridiculous".
"I hope they have a factual basis that they can demonstrate for their defamatory and libellous allegations," Brent Bryson said in a statement.
Earlier this year, Patty King, Karen Williams and a third daughter, Rita Washington, went to court accusing Toney of neglect, but the case was dismissed because of a lack of evidence.

King was born on 16 September 1925 to sharecroppers and worked in the cotton fields as a child before picking up the guitar.
Considered one of the world's greatest players, he was known for his sharp single notes and vibrato on the electric guitar he christened Lucille.
Known for songs such as The Thrill Is Gone, Three O'Clock Blues and Darlin' You Know I Love You, he influenced generations of guitar players, and was inducted to both the Blues Foundation Hall of Fame and the Rock and Roll Hall of Fame.
He was married twice and had 15 natural and adopted children, 11 of whom are still alive.
His funeral is scheduled to be held on Friday in Mississippi.
The Clark County coroner said his investigation would not delay the service.
at 8:01 AM