BREAKING NEWS! Obama trying to "Back Door" The election!

Delta News & Review has learned today from a reliable source that the Obama administration will sanction an Israeli strike on Iranian nuclear facilities. However, U.S. prior knowledge will be disavowed in order for Obama to be able to play peacemaker and ease the war tensions and appease Russia and China. Israel will see through this ploy to get re-election of Obama back on track with American Jewish voters and get all voters attention off the U.S. economy. Unfortunately Israel has a win-win opportunity to take him up on this offer. If a crisis gets him re-elected they win, if they strike Iran right before November with little time to defuse a crisis, it will benefit the Romney campaign. Look for Israel to try to get the "best of both worlds." In the end, Israel knows who will stand with her regardless of political gain.

(Reuters) - U.S. Secretary of Defense Leon Panetta denied media reports on Tuesday that he would discuss possible military attack plans against Iranduring a brief visit to Israel.
Speaking at a press conference in Cairo shortly before departing for Israel, Panetta said he would be talking about "various contingencies", but said specific military plans would not be put forward. 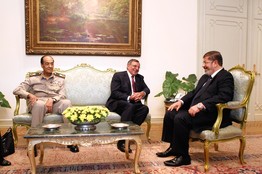 "I think it's the wrong characterization to say we are going to be discussing potential attack plans. What we are discussing are various contingencies and how we would respond," he said.
Asked whether these included military options, he said: "We obviously continue to work on a number of options in that area, but the discussions that I hope to have with Israel are going to be more about what is the threat that we're confronting and to try to share both information and intelligence on that."
Western powers believe Iran is seeking the technology to build a nuclear bomb and Israel has repeatedly hinted it might use force to try to halt its arch foe's atomic program. Tehran says its nuclear work is for peaceful purposes.
The United States has said it is determined to prevent Iran from getting the bomb, but has called on Israel to give more time for increasingly severe economic sanctions to work.
"Both of our countries are committed to ensuring that Iran does not develop a nuclear weapon and to that extent we continue to work together in the effort to ensure that Iran does not reach that point of developing a nuclear weapon," Panetta said.
Top selling Israeli daily Yedioth Ahronoth said on Tuesday that Panetta intended to show Israeli leaders the plans being drawn up by the Pentagon to stop Iran if diplomacy and sanctions failed to persuade Tehran to halt its nuclear program.
Israeli Prime Minister Benjamin Netanyahu said he had not yet decided whether to attack Iran's nuclear facilities, dismissing repeated media reports that the military objected to such an operation against far-flung, fortified Iranian sites.
"In Israeli democracy, as in any democracy, the political echelon is the one that decides and the professional echelon (the military) executes. I have not yet made a decision," he told Israel's Channel Two news on Tuesday evening.
He added that the debate in the media about a possible offensive was "harmful" and "not serious".
The Israeli army chief, Benny Gantz, told reporters in Tel Aviv earlier in the day that the Israeli Defence Forces (IDF) were ready to attack Iran if ordered to.
"The IDF is ready and prepared for action and as we see it 'all options are on the table' is not a slogan, it is a working plan and we are doing it," he said, referring to a line often repeated by Israeli politicians when discussing Iran.
Panetta is due to meet his Israeli counterpart, Ehud Barak, and Netanyahu during his stay in Israel, part of a broader trip to the Middle East and Africa.
A senior Israeli official on Sunday denied a separate newspaper report that President Barack Obama's national security adviser had briefed Netanyahu on a U.S. contingency plan to attack Iran should diplomacy fail to curb its nuclear ambitions.
(Additional reporting by Maayan Lubell in Jerusalem; Writing by Crispian Balmer; Editing by Alessandra Rizzo)
at 6:38 PM