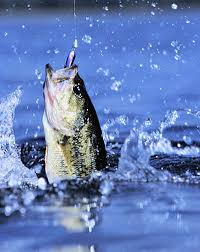 Striped bass continue to build, but the fall migration is nowhere near its peak. A 12-pound striper is indeed a rare catch. Most keepers run 4-6 pounds and the bulk are taken on bait such as shad, mudsuckers and anchovies. Shallow trollers take fish in less than 10 feet of water, but often find lures fouled by floating weeds.
Better striper action seems to come below Rio Vista on the Sacramento River from Sandy Beach down to Collinsville and on the San Joaquin River at the Antioch Bridge, Chain Island and False River.
Bass are more numerous and far-flung on the San Joaquin at Mossdale, Discovery Bay, Twitchell Island, Terminus, Herman & Helen's, Windmill Cove and the Turning Basin at the Port of Stockton. Most anglers use bait, while some toss spoons or Rat-L Trap lures once a school is located.
Catfish and sturgeon are afterthoughts, though a 1.4-foot minus tide could change things. Black bass weigh less than 3 pounds and go for plastics, reaction baits and jigs worked slowly outside weed lines or at tule breaks in Frank's Tract and Mildred Island.
The king salmon run seems to be waning but most boats continue to sack a king or two pulled on Silvertron Spinners (green-red or green-silver colors) on the Old Sacramento River from the mouth at Vieira's Resort to Isleton, and all the way to Walnut Grove, Clarksburg and Freeport. The gates are in place at Walnut Grove to steer salmon into the Mokelumne River, a possible reason why the bite has slowed this week.

Ocean - Best option is rockfish and lingcod at Point Sur, Martin's Beach, Farallon Islands and Bodega Bay. Salmon fishing is spotty with charters taking about three salmon per outing to 12 pounds. Most kings measure 24-26 inches. Few albacore respond to skiffs out of Bodega Bay, weather permitting. White sea bass bewilder anglers on Monterey Bay boats because of inconsistency. Long time partyboat owner and skipper, Peggy Beckett of Huck Finn Sportfishing in Bodega Bay, has sold her business. Her honesty and contagious smile has been a staple for three decades.
Bays - Striped bass to 8 pounds taken regularly at Treasure Island, Oakland Airport and Candlestick Point. The bite is wide open for trollers or casters who hurl worm-tailed jigs into San Pablo Bay along the shallow Marina shoreline. But only 1-in-10 bass are 18-inch or larger keepers. Upcoming minus tide should spark the sturgeon bite at the pumphouse. Salmon fishing at California City is quite slow. In Suisun Bay, mudsuckers and live bullheads entice stripers to 16 pounds at the PG&E plant at Pittsburg, Middlegrounds and Montezuma Slough.

American - Guides hooking upwards of 15 salmon an outing, at times more than 20, in the upper river at Sunrise Avenue. Roe is the ticket. Even shoreline waders are hooking up limits. Half-pound steelhead in the faster water. Salmon season closes Oct. 31 above Hoffman Park, but remains open below the park to the mouth.
Feather - No reason to travel this far, but salmon are stacked between Gridley and Live Oak, and below the Afterbay Outlet to the mouth of the Yuba River. Note: Angling is not allowed within 1,000 feet of the outlet.
Klamath - Angling for adult-sized salmon greater than 22 inches to 35 pounds is good from Somes Bar to Iron Gate. Steelhead are following salmon and fall vulnerable to egg patterns and nymphs. On the Trinity River, hatchery steelhead in the 6- to 8-pound bracket get after stonefly or copper John patterns from Del Loma to Junction City. The river is stacked with salmon so anglers must focus on riffles to hook steelies, if that is their desire.
Sacramento - Beat goes on for salmon, 6-9 pounds, occasionally to 35, from Chico Straits to Balls Ferry. Guide Bill Quinn of Shingletown reported fast limits all week. Larger salmon go for Kwikfish with a sardine wrapper in the wee hours before the bite switches to roe about 9 a.m. for smaller kings. Bouncing egg patterns is exceptional for wild rainbows from Redding to Anderson, where trout are scooping up freshly laid salmon eggs.

Lake Amador is releasing large cut-bow trout each week, 2 pounds and larger. Los Vaqueros Reservoir is holding at 50 percent elevation, with the marina and boat rentals closed for the season. However, shoreline anglers who toss anchovies are hooking about 5 to 10 striped bass a day, in the 6-pound bracket. Only the south entrance is open to Los Vaqueros. Lake Camanche resumed planting trout last week, so bank action should be good, especially near marinas. Don Pedro Lake offers trout and the occasional salmon to 4 pounds. Trout run 20-40 feet deep and get after single lures that imitate inch-long shad minnows. New Melones Lake is good for some trout anglers, but poor for others. Try trolling deeper rather than shallow. At Hogan Reservoir, field scout William Heinselman of Valley Springs reported boiling stripers feeding on the surface, but only from mid-morning through the afternoon. Zara Spook, Hair Raiser jigs and Kastmasters do the number on stripers to 7 pounds.

Both forks of the Carson River continue to be planted by Alpine County. Red eggs and small spinners hook rainbows to 7 pounds. At Lake Alpine, black-red wooly buggers and black gnats take quick limits of rainbows for float tubers. The boat ramp is almost out of the water. Watch out for an abrupt drop-off just below the surface. Top-liner do well trolling here, with limits of 14-inch trout the rule. Oct. 31 is the close of the special Friday-Sunday, catch-and-release season for giant Lahontan cutthroat trout at Heenan Lake. At Eagle Lake, the first 4-pounder in a long time was hooked this week in 12 feet of water on a red-white fly trolled at 1.6 miles per hour. Trout are moving into the shallows on either end of Eagle Lake, and could go onto a major bite if the weather stays cool. At Beardsley Lake, look for brown trout to start moving toward the inlet, before running up river to spawn.
at 7:44 PM